And the winner is…El Celler de Can Roca in Girona, Spain.

After three years atop the world, Noma in Copenhagen flip-flopped today with last year’s runner-up, after the San Pellegrino and Restaurant Magazine World’s 50 Best Restaurants were revealed in London.

The world’s new best restaurant lived in the shadow of fellow Basque region stalwart and longtime “best restaurant in the world” El Bulli, before Ferran Adria turned his legendary molecular gastronomy institution into an institute a few years ago.

El Celler de Can Roca is no secret. Opened in 1986 by the three Roca brothers, the restaurant has held three Michelin stars each year since 2010. Joan Roca is the head chef, while Jordi Roca is the pastry chef, and Josep Roca is the sommelier.

Yours truly spent a layover day in Girona seven years ago (Ryan Air doesn’t fly directly into Barcelona, so Girona is the closest airport, about an hour northeast of Barcelona), but unfortunately didn’t have the chance to visit the Rocas. Instead, I enjoyed some bocadillos at a vintage tapas bar-coffee shop. The city is straight out of a postcard with its meandering Onyar River, striking bridges, and the spectacular cathedral. I have a feeling Girona will be much more known after today’s announcement.

Roses, home to the El Bulli Institute, is a bit further north up the Costa Brava. San Sebastian may still be the capital of Spanish gastronomy with two restaurants in today’s top 10, but the Costa Brava once again can lay claim to being home of the best restaurant in the world. END_OF_DOCUMENT_TOKEN_TO_BE_REPLACED

Here are the World’s 50 Best Restaurants

Just announced in London this evening: Ladies and gentlemen, presenting the 2013 World’s 50 Best Restaurants from Restaurant Magazine and San Pellegrino. Included are the next 50 “best” as well.

Obviously, the big news is that there is a new name at the top of the list, replacing Noma in Copenhagen after three years running in first. We’ll take a look at El Celler de Can Roca, along with much more analysis from this “important” news in this afternoon’s Plat du Jour section.

Proof that wine does indeed grow in all 50 states, the lone winery on Maui produces some very noteworthy wines from myriad fruits. Conveniently known as Maui’s Winery (there are also wineries on The Big Island and O’ahu), the winery itself is not so convenient for visitors. Maui’s Winery is easily a half day trip, at least an hour from Kahului, way high up in the upcountry beyond Kula. It feels like the top of the world there, or at least the island. No, there are no roads that lead from Wailea up the hill to the winery, as convenient as that would be (“Only Oprah” is allowed to use those back roads I was told at the tasting room).

It’s only convenient if you spent the morning exploring the volcano Hale’akala, but well worth the drive for more than just the novelty of drinking wine from Hawaiian terroir.

Let’s first understand that these wines aren’t exactly going to be getting 90+ plus points from Wine Spectator. It’s a fine terroir, but there’s a reason humidity isn’t a grape’s best friend. The tropical climate and volcanic soil are excellent for many vegetables and fruits, including pineapples. That doesn’t mean pineapples age elegantly into wine like Cabernet Sauvignon grapes. Pineapples do age into admirable wine, though, that is certainly worth at least trying.

For most of the 180,000 yearly visitors to Maui’s Winery, the big question is, “What will pineapple wine taste like?”

The answer is very simple: It tastes like a less sugary, more refined pineapple juice. In many ways, pineapple wine is much more pleasing because of its restrained sweetness compared to regular pineapple juice. Everything is very balanced with a beautiful guava nose leading to a semi-dry wine, teetering between fresh fruit and floral influences. Some mineral notes arrive at the close letting you know this is a thorough, full-frontal wine that is absolutely drinkable. Maybe too drinkable for those of who know how quickly well balanced Mai Tais last. END_OF_DOCUMENT_TOKEN_TO_BE_REPLACED

The Foodie Top 100 Restaurants: Worldwide were unveiled this morning.

Wait, hold on. I thought they were supposed to be unveiled on Monday in London?

Yes, that is correct. The World’s Top 50 Restaurants (that really is a list of the top 100 restaurants) presented by San Pellegrino and Restaurant Magazine will be announced on Monday April 29. That is the world’s best known and most contentious list. It’s the list once dominated by El Bulli and recently Copenhagen’s Noma Restaurant has been the winner for three years running.

Today’s list on the other hand is called The Foodie Top 100 Restaurants: Worldwide, courtesy of Glam Media. The 100 restaurants are not ranked in any order, so you can’t ascertain if Noma is higher than Alinea. The goal of this list is to be more transparent and relevant to the younger foodie generation, actually using that modern fervent gourmand term so often despised those it is meant to label. Here, foodie is intended to be nothing but a positive term. 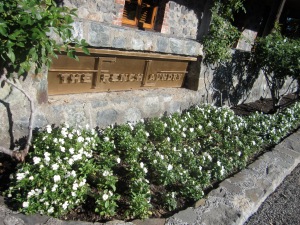 The transparency can be found everywhere. The extensive list of runner-ups is also included, so you can see that somehow Paris’ Ze Kitchen Galerie is included in the top 100, but the likes of Paul Bocuse, Belgium’s In de Wolf, and the United States’ Manresa could only be in a top 200 or 300. Ze Kitchen Galerie has some exciting cooking going on in the Paris’ Left Bank, but really, let’s not get ahead of ourselves, especially if this list factors in service and atmosphere as it claims to (will admit that yours truly had a not so positive experience when I dined there, not trying to pick on them).

There are all sorts of lessons that the restaurant world should take note of from this dynamic hidden neighborhood spot along the busy Indian School Road thoroughfare at the border of Phoenix and Scottsdale, which I’m told is known as Arcadia. Before you delve further into the countryside paradise concept of Arcadia, this mini-mall filled version is much more akin to Los Angeles’ suburban town Arcadia than Tom Stoppard’s idea.

Though the address says Indian School, it really could be somebody’s backyard or a parking lot alleyway instead, since this desert treasure of a neighborhood bistro is tucked away from apparent view on the rear side of the Gaslight Square shopping center. I would venture to guess at least 50% of diners might do the same as me, parking their car in the front assuming they’ll find the restaurant here somewhere, only to stumble onto it ten minutes later. In Phoenix’s heat, those could be ten very long minutes. For this restaurant, I would walk from Downtown Phoenix for the smoked olives.

This suburban speakeasy equivalent restaurant is the second iteration of Crudo. The chef Cullen Campbell’s original was a hit from 2009 to 2011, actually sharing space with a salon further east in Scottsdale. I’m not sure what it is with Crudo and hidden locales within shops or shopping centers. It proves to diners that a little research goes a long ways into uncovering where hidden talent is being displayed behind the stoves, behind the jewelery stores.

Phoenix is one of the country’s most underrated dining regions, often only thought of as the faraway scorching hot home to Chris Bianco’s mythical pizzas. Amongst the Valley’s shining dining room stars, Crudo is no doubt one of the elite. 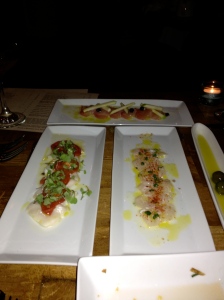 Crudo Part II just celebrated its first birthday. What a celebration I hope it was for such an accomplished restaurant after its initial year. But hold on folks. The actual birthday celebration will be held tomorrow, Thursday April 25th. Diners in the desert should be on their way to the phone for reservations immediately after finishing this article.

END_OF_DOCUMENT_TOKEN_TO_BE_REPLACED

When it comes to Colorado breweries, it’s hard to say who is the Rocky Mountain highest in the eyes of the national beer scene. Oskar Blues might be the best known, if for any other reason than their importance in the advancement of canned beers. Perhaps, it might be one of the cult favorites, such as Avery or Great Divide, with their powerful barleywines, aggressive IPAs, and molasses-thick stouts. Then there is always Coors and the “New Coors,” also known as New Belgium. Then there are some fifty- plus breweries around the state that intense scholars of the subject might know about, but you most likely are not familiar with.

Not tremendously far from New Belgium’s brewery in Fort Collins and sharing Longmont, the same otherwise nondescript farm town along the Front Range as Oskar Blues’ brewery, is Left Hand Brewing Co. While the other tasting rooms either are in the spacious brewery room itself or resemble frat rooms, Left Hand could be the corner pub if it weren’t for the national level quality of what they serve. This is where Norm Peterson would get a nightly pint if he followed Wes Welker west from Boston.

Left Hand started in 1990 as the home brewing project of Dick Doore. For those of us who aspire as homebrewers, it never fails to astonish me how some can continue on to make such incredible brews, while the rest of us could never dream of opening a place like Left Hand. Doore teamed with ex- college friend Eric Wallace in 1993 and started the Indian Peaks Brewing Co.

Then the lawyers got involved. Another brewery was making a style at the time with the same name. Cease and desist is never a fun game. Hence, the brewery’s new name came from the local southern Arapahoe Indian tribe’s leader, Chief Niwot, whose name translates to “Left Hand.” END_OF_DOCUMENT_TOKEN_TO_BE_REPLACED

On this late April Monday, it’s snowing in Denver and still crisp Autumn weather in the Northeast. Spring hasn’t quite got the message yet that it was supposed to start a month ago (meanwhile it’s summer already in California).

Which of course then makes us think of Mai Tais and beaches in the tropics. Honolulu’s high today was a cool 82.

For this Monday’s neighborhood of the week, we say a very warm “Aloha!” to beautiful Kapalua, a resort area in the northwest corner of Maui.

Kapalua almost always is spoken in terms of golf with its 22,000 acres of luxury condos spread between the coast, two eighteen hole world-class golf courses, a golf academy, a Ritz-Carlton, and Highway 30 at the top of a steep incline to the east. Golf is in the air everywhere, you can’t escape it. Fortunately, you can be rest assured the courses are far enough from the beaches to not hear “Fore!” when sunbathing.

The PGA golf season’s first event, the Hyundai Tournament of Champions, occurs the first week of January each year on Kapalua’s Plantation Course (Dustin Johnson won this year). While the rest of the country is marching back to work through snow after New Years, the golf world is savoring the Kapalua sunshine and splendid views west towards Molokai.

On Maui’s West Coast traveling north towards Kapalua you have the New Orleans-evoking charm of the area’s “town,” Lahaina, then the decidedly un- Hawaiian skyscraper hotel-resorts of Ka’anapali, followed by the more subdued communities of Kahana and Napili Kai (for our readers’ interest, the Maui Brewing Company’s brewpub is in Kahana). Then you reach our destination, beginning with Kapalua’s Bay Course, full of Cook pine trees everywhere, with views over Napili Bay. END_OF_DOCUMENT_TOKEN_TO_BE_REPLACED