I’m still wide awake a week later from all of the espresso I enjoyed when comparing one barista’s shot to another at a dozen different cafés across Portland. Seattle may receive the fame when it comes to coffee thanks to a certain empire with headquarters there. Seattle may also receive the fame because the city is always associated with gray, rainy weather that makes you want nothing more than to linger for hours over a latté on a cozy couch.

Portland on the other hand gets the press for its food, its beer, and its quirky “Portlandia” culture. All three certainly are everywhere in the city, especially if you are willing to explore outside of Downtown. However, let us not think that it doesn’t rain in Portland either. My week plus trip to Seattle and Portland somehow was completely immersed in spectacular summer-like sunshine. It must have been me the Californian bringing the Los Angeles weather to the Northwest. Usually though, I gather it rains quite often in Portland. The recent weather may have been more appropriate to enjoy an iced coffee. With its enviable wealth of worthy cafés with baristas at the top of the espresso game, whether or not it was eighty degrees, an espresso at each café was the purest, most honest way to compare the fascinating differences of Portland’s coffee shops. With all of the world class beer produced in Portland, it is only fitting that the city may be the strongest in the country for coffee as well, to keep everyone awake.

I made the mistake on my final morning of crunching too many espressos into a short amount of time, combined with the stress of trying (and missing by 30 seconds) the Max light rail to the airport. Was that worth the final sip of Spella’s espresso? Eh, well…

It’s hard to say who is the leader of this beyond impressive bunch of cafés. Unlike most cities where you’re lucky to find more than three or four coffee roasters who also have cafes, over 20 micro coffee roasters exist in Portland. Don’t even think of not serving your own coffee, or at least, somebody else’s locally roasted single origins. And don’t even dream in Portland of serving an espresso shot without a sidecar chaser of sparkling mineral water.

The premier espresso and espresso shop is Spella in Downtown near Pioneer Square, the main plaza of Portland. Andrea Spella used to operate out of a food cart nearby and now pulls his shots in a 180 square foot space that isn’t much larger than a food cart. The space screams of Italy, simple yet ornate with nothing much more than a machine, a cash register, and a one person bar by the stamp sized window. The key to top tier espresso is the crema, or froth providing structure, and then the depth of flavor. Spella’s shot thrives at both, in particular the thickest crema I have encountered. When another barista pulled a shot here for me on my follow up visit, the crema was only fair. When the master is in charge, the crema makes the shot almost like hot chocolate. Every morning is infinitely brighter with a stop here.

Water Street Coffee’s espresso is the most unique, boasting an excellent crema as well and full of vibrant fresh raspberry notes. I should never use the word hipster when describing a cafe, yet it really is the vibe inside of this hopping, modern cafe on the eastern banks of the Willamette. Extra points here for being steps from Portland’s best microbrewery, Hair of the Dog.

My favorite of the cafes in terms of atmosphere happens to be right by Water Street, Coava. Sharing space with a design studio, Coava roastery and cafe feels like you’re in an atelier because you are in one. The coffee is the work of artists too, with an excellent, bourbon rich Rwanda single origin espresso. The modern, wood design loft feel happens to be almost identical to my favorite in San Francisco, Sightglass (which is two stories, unlike Coava’s single story).

Though not a roaster, Barista’s baristas know there way to a top notch espresso. The Northeast selection offered me a softer, more subtle shot from Heart’s beans (also in Portland) in a taxidermy heavy, new cafe. The Pearl District original is preferred for its ever so chic feel that verges on but never reaches the holier than thou feel of several other modern coffee bars. Barista in the Pearl did happen to make the most complete, balanced cappuccino of the trip, which doesn’t count too much on an espresso tour.

I adore the Courier Coffee Roasters (and their house baked, sensational cannelés) for a darker, slightly less complex espresso shot that boasts a crema similar to Spella’s and a tiny, spare space nearly as petite as Spella’s.

Even smaller than Courier, tucked into a glass enclosed hut next to a Trader Joe’s in the Northwest is Sterling Coffee Roasters. Despite essentially being a cart, Sterling provides the most elegant experience with the most expensive, but largest shot weighing in at $3 (the only one served with a sugar cookie). Again, a beautiful crema was presented, yet the woody taste was a touch off. I adore the setting though, enjoying this regal espresso at a sidewalk table by a supermarket parking lot.

Let us not forget Stumptown, the grandfather of Portland coffee roasters, now in Seattle and New York too. Stumptown’s most talked about location is in the Ace Hotel, the impossibly chic slice of Brooklyn between Kenny and Zuke’s and Clyde Common (great espresso, great pastrami, great barrel aged negronis!). The lack of sparkling water and a somewhat generic, corporate feeling bar knocks off a shade of a point. Fortunately, the espresso itself is bold, hinting of blueberries and tarragon. Skip the shop itself for enjoying the coffee and go next door to the Ace’s lobby and join the fashion savvy crowd reading the New York Times in a well worn couch at the low coffee table. I guess the new age hotel lobby can be rugged instead of luxurious. 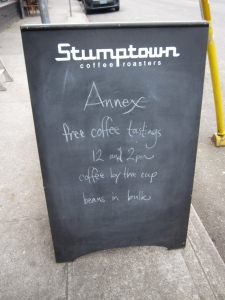 Stumptown’s Annex on Southeast Belmont is a mandatory stop for coffee lovers to take part in their daily cuppings at noon and two. The cupping ritual is fascinating, far more complex than any wine tasting I’ve experienced. Begin by smelling each of the five beans being tested through both nose and mouth for the maximum aroma. After the surface of each coffee is skimmed out, you’ll try each cup with a quick slurp to avoid the coffee hitting your lips, you want it just hitting the back of your palate. Each coffee is in two cups and you taste each one in order to pick up different notes or see if one cup differs from another at all. Then the debate ensues. Adjectives sprout up from all taste memories: douglas fir, Bob Dylan, rectangles, raspberries, lingonberries, toro tuna…Then pick the favorite. For this day, it was the rich, slightly coconut and toffee tasting Gajah Aceh from Indonesia.

The only clunker was a watery shot from Public Domain in Downtown, shocking for a cafe that roasts its own beans. The flashy decor and disinterested barista didn’t help matters either. At least they provide sparkling water. 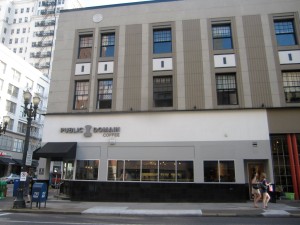 Is that enough coffee for a few days? We didn’t even get the chance to try the highly regarded offerings from Heart and Ristretto, or the coffees from Red E, the little café that could that serves coffees from the city’s elite roasters. I’m pretty sure I’m still awake now days later because of all this espresso. Then again, it’s needed to write about all these cafés.