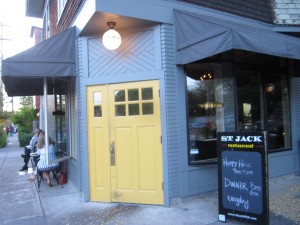 Portland doesn’t exactly strike you initially as a petite corner of France in the Pacific Northwest. Then again, like France’s two largest cities, Paris and Lyon, Portland is divided by a central river, splitting the city into west and east, as opposed to the Left Bank and the Right Bank. Yes, Ken’s Artisan Bakery bakes some exquisite baguettes and croissants, and the nearby Willamette Valley wine region specializes in Pinot noir, a grape that is most commonly known for being used in the French wine growing region of Burgundy. The largest city in Burgundy? Lyon.

Amidst the microbreweries, coffeehouses, yoga shops, food cart pods, and what not of Southeast Division Street in Portland, there is a sliver of joie de vivre as dainty as a madeleine emerging on 21st Street, between Division and Clinton. One end is anchored by the terrific wine bar that summons its name from the Provence town known best for its summer festival, Bar Avignon, and at the Clinton end is a fervently authentic Lyonnaise bistro with a distinctly Portland voice, St. Jack. Not St. Jacques, but St. Jack. A decision worth pondering over before perusing the French heavy wine list that not surprisingly leans strongly towards Pinot noir, Gamay noir, and Rhône blends.

Just the name itself, like Le Pigeon, signals a dash of flare to go with the classic bouchon standards turned out for centuries in the city that actually is France’s culinary capital. Lyon’s gastronomic headlines may always go to the legendary Paul Bocuse, quite possibly the world’s most celebrated chef who still runs the show at his eternal Michelin three star flagship on the outskirts of Lyon. St. Jack isn’t trying to present Paul Bocuse to Portland diners. They’re aspiring for the likes of La Mère Brazier, a gastronomic destination that happens to have sausages hanging from the ceiling in place of chandeliers and sawdust on the floor instead of carpet.

St. Jack is more refined in atmosphere, with a front room that could serve as a movie set for a 1920’s Hemingway era Parisian bistro with its ardoise announcing specials, wooden tables, and zinc bar, and a back room with similar features minus the bar. On off nights it can feel a bit like Siberia to be placed in the rear. Even the entrance feels like you could be walking in after a stroll along the Saône in Lyon, arriving to tree lined residential street with a corner bistro boasting a single lamp above the door illuminated with the name “St. Jack” written on it. In a neighborhood boasting so much hip, young energy, St. Jack’s presence is a blend of the old guard with this new passion for exploring the world’s food cultures.

A meal at St. Jack is a three course affair, or four if you are inclined for cheese. Don’t try to buck the system. When I lived in France two years ago, a day didn’t go by where I didn’t meet somebody who would almost shed a tear when talking about France’s old dining standards have changed for the new, rapid, Iphone, Twitter generation.

Commence with some of Lyon’s, I mean Portland’s, premier cocktails from that zinc bar. I will always order the Baccarat, as pristine as a Baccarat crystal, a daring take on the Manhattan with orange bitters, sour aperol, and a touch of sweet from maraschino liqueur. For something lighter yet still complex, the French Pearl, designed by Audrey Saunders of New York’s Pegu Club, blends tow classic French apértifs: a mojito riff of mint and gin, then mixed with the anise heavy Ricard pastis. You better like mint and licorice for this one. Fortunately it avoids being medicinal, instead is as fresh as the lavender this time of year in Les Baux de Provence.

It’s really about eating in Lyon. It’s about copious amounts of offal heavy, butter and cream intense, cuisine that makes Julia Child swoon. In the hands of Aaron Barnett, Lyon’s cuisine gets screened through a refinement process. You’ll find plenty of offal, a trait Lyon certainly shares with Portland. Fried tripe could win over any offal-phobe, with a caper and red onion mayonnaise. I was hoping to find sweetbreads or pig’s feet on the menu to determine whether this really was a Lyonnaise bistro. Barnett answered emphatically with a nightly special of pig’s feet stuffed with sweetbreads, a treat that Craig Claiborne would have booked a flight for.

This is a bistro inspired by Lyon, hence a salade Lyonnaise must be present. The standard frisée with bacon fat croutons and intensely smoky, crunchy bacon lardons get tossed about with yolk of a broken poached egg becomes a salty, simple revelation. Steak tartare is perfectly seasoned with a higher than average number of cornichons and capers to provide a needed salt and spice spark to the raw beef. It goes perfectly on the baguettes provided to each table. You can never eat enough crunchy on the outside, soft as a pillow inside baguette. St. Jack provides a terrific opportunity to try many more standards done with more heart and a hint of creativity that I rarely saw in France even: escargot in a gratin with ham and onions, not too unlike a solid French onion soup, or venison terrine made in house, or frog legs en persillade.

Entrées, or I should say les plats principaux, pick up right where the starters left off. Servings are never trencherman’s specials. They’re perfect. The steak frites reminded me of the rare, sashimi like entrecôte at L’Entrecôte in Paris, a mini chain of restaurants that serves nothing except steak frites. St. Jack’s onglet steak in a red wine demi glace is even juicier and more tender, the fries addictive and don’t even need the béarnaise with them for dipping.

Like steak tartare, boudin noir became my standard order while in France, something that very much pleased my host father, an old school French eater who took great delight in teaching me how to eat the inside of a rabbit’s head (it’s the best part!). When cooked in capable hands such as Cannon’s, boudin noir is as silky as rich chocolate mousse, as robust the most flavorful pork chop. The pommes purée, or mashed potatoes, are richer than usual as they should be, never skimping on the butter. The apples provide a counter-punch to the blood sausage, along with some kick whole grain mustard.

I was fine with two of the seafood dishes. Neither inspired me, yet I couldn’t find any fault. A whole roasted trout, beautifully flaky, is served simply atop green lentils, and a bad too much brown butter. Clams replace mussels in a fennel heavy, vermouth based broth that wasn’t crying for more baguette to absorb it. It’s a dish that would be fine as an appetizer, but very quickly the clams became monotonous.

The star of this feast, without question, was a special bouillabaisse. O.K., it’s the fish stew of Marseille, not Lyon. We’ll give a pass though for this fascinating, enthralling interpretation with a smoky-sweet caramelized onion broth that achieved the layers and depth of a canyon. Filled with seafood of all shapes and sizes– crab, scallops, shrimp, white fish, you name it, this was an epic dish that soon you will see on the covers of national magazines. Miramar in Marseille, the stuffy “inventor” of bouillabaisse makes a weaker, twice as expensive version that could take several lessons from this one. No two bites of bouillabaisse are the same. Some are of seafood. Some are of just broth or broth with bread. Some are seafood, broth, and bread slathered with the essential rust colored aioli known as rouille. Eating doesn’t get much better than this.

Never skip dessert by Alissa Rozos. Her madeleines baked to order come 20 to a bowl, warm, one bite vignettes of why the world is still fascinated by French baking. They’re tiny, about three of them equal an actual madeleine. Rhubarb mousse cake is terrific, fresh and moist. Nothing can compete with the dark chocolate-caramel crémeux, given a bit of levity from a sensational iced coffee sorbet and little chocolate covered espresso beans. The dark chocolate mousse is topped with a quenelle of everyone’s beloved salted caramel, here in a form similar to cream. It’s a playful dessert while being drop dead rich. Competition becomes fierce for the final bites.

Rozos’s baking prowess has led St. Jack to turn the back room into a tiny café and patisserie in the morning and afternoon. Her cannelés have achieved cult status, often sold out before most of Portland wakes up. I didn’t get any pity for showing up three hours after they were long gone. The superb pain au chocolat, macarons, and chocolate financier (think a chocolate chip cornbread muffin that tastes like Cracker Jack) were every bit as excellent as the desserts with dinner.

Service is excellent, from the pacing, to the very friendly greetings and always willing to offer wine insight or a diplomatic way of swaying the offal shy to give tripe a chance. In fact, the only slight complaint aside from the repetitive clams dish would be that some seats in the front room have a beautiful, unblocked view of the dishwashers, not exactly what you want to see when about to eat dinner.

Wine prices are shockingly good deals, in particular the concept of les pots Lyonnaises served at bouchons, where 46 CL bottles of wine (just over a half regular bottle) directly filled from the barrel, can be ordered at barely double the price of a glass.

Barely a year old, yet bound to become an institution, St. Jack is a prime example of what a French bistro should be. It’s the type of welcoming, cozy yet slightly elegant place that makes people melt when recounting the first time they fell in love with French cuisine. Except, St. Jack is even more exciting than just a really good bistro. There is creativity and energy here, some cooking that provides tremendous spark to a cuisine that once ruled supreme, then became a caricature. At St. Jack, the superpower is back.