The countdown is on until Summer officially swings around at the end of the week. Food-wise and weather-wise with the plentiful hot temperatures nationwide and ripe apricots, figs, and sweet corn in the markets, it really is summer already.

A week ago, summer came very early to the Monterey Peninsula, south of San Francisco. It is an area of immense natural beauty, along with frigid temperatures and immense fog banks this time of the year. Somehow for the wedding day, the weather Gods intervened and made the day cloudless and in the 80’s. With the backdrop of the Pacific glittering behind the altar, the setting was nothing short of magical.

Everybody was in a blissful, celebratory, and sunburned state all afternoon. The question is, how did the Hyatt Carmel Highlands, just south of Carmel and north of the Big Sur coastline, perform for the dining critics?

It’s never easy to choose a dinner menu for any large gathering. Chances are the dinner will be over $100 a person, so comparing this banquet meal to an equivalent price at a sit-down restaurant is impossible. $100 for eating at Le Bernardin goes a lot further than any Hyatt ballroom. Somebody doesn’t eat tomatoes while somebody else is afraid of carbs, and somebody else only will eat plain salmon. With all of these challenges, you often see more diplomatic, safe options on the menu, like chicken, salmon, crab cakes, and salads with maybe some bacon and bleu cheese for a little pizazz.

Guess what, three of those four at least made appearances on the menu by executive chef Matt Bolton. Fortunately, nothing was even close to banquet food quality. Nothing was special, yet a big round of applause to the Hyatt kitchen staff for their efforts. At the post ceremony reception, waiters served tiny hors-d’oeuvres of the bruschetta and risotto ball family. With the recent spicy tuna scare, a plate of spicy tuna on a won ton chip didn’t seem so appealing. The chip was too large for a standing reception. I saw at least five people spill tuna on themselves trying to make the bite last two bites.

Entrées were a grilled wild king salmon, perfectly moist, with bland fingerling potatoes, overcooked asparagus, and excellent wild mushrooms, in a vague truffle vinaigrette. Of all the dishes, this one veered furthest to the conservative side. Bolton holds nothing back for meat eaters with the bacon wrapped, tender filet mignon, a tad over the requested medium rare. I did not care fir the bread pudding that begged for more of the promised gorgonzola, or the chewy carrots. The shallot jus would have been just fine in any Parisian bistro.

Dessert? Of course, the cake. And why sheet cakes can never be moist or exciting is beyond me. This vanilla-chocolate hybrid was no exception. Bakers nationwide now have crafted very worthy cakes of all kinds, it’s time that wedding cakes follow suit. 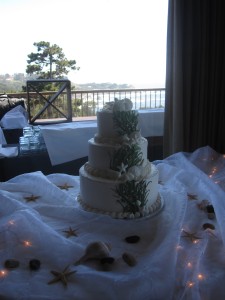 For the most part, bravo to the hotel for conquering the arduous task of a wedding dinner. The only faux pas was how I noticed the off pacing between salads and entrées led a slew of the main plates to sit for several minutes outside the room. Too many wine glasses and water glasses were taken prematurely with guests leaving and coming everywhere. On the plus side, the excellent lead waiter managed to procure some olive oil in the kitchen when requested to go with the bread in place of the pointless butter on each table.

Weddings aren’t about the dinner. It’s about the family, friends, and the love of those getting married today. A celebration with terrific food with the company makes everything even better. This dinner may not win awards, but it certainly was an enjoyable one.