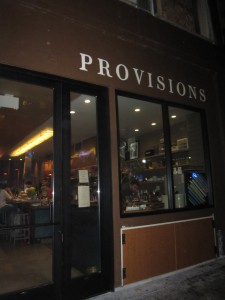 Pancakes, quail, and cheesecake are a bizarre trio to be the showstoppers of a sizzling new, highly innovative restaurant trying out a truly ambitious concept. State Bird Provisions, the slightly less than a year old establishment from the husband and wife team of chef Stuart Brioza and pastry chef Nicole Krasinski, is certainly unlike any other restaurant I’ve found before. Yes, there are tapas bars all over Spain and now all over the world. The small plates revolution of a decade ago came and went and might be back again and then probably will depart again. Dim sum is of course a staple for lunch at Chinese restaurants.

But what really is State Bird Provisions? It shares the carts and trays carrying the food of dim sum-style service. The plates range from tapas-sized to small plates to medium-small plates or small medium-sized plates.

Is there really a cuisine when a petite, cast-iron pot holds a sizzling kimchi-pork belly-tofu dish, while you can also sample tuna crudo covered in quinoa with a bonito-rosemary aioli, or chips, salsa, and guacamole is re-interpreted with a seafood salsa atop slices of Haas avocado. The cuisine really would be that wonderfully vague “California-New American” cuisine, where inspirations from around the world show up on the menu and the real cohesive theme is the emphasis on ingredients, seasonal cooking (everywhere on this menu from tomatoes to melons), and excellent technique. There is no preaching about the farms and orchards where the pigs and plums came from.

State Bird Provisions is not a restaurant that can be labeled by a cuisine. It is a restaurant that can be labeled with a spirit: the spirit of a convivial dinner party. Think of the dining room on Fillmore as Brioza and Krasinski’s kitchen, dining room, and living room, and forty or so of their best friends fill up the house every night by starting with hors d’oeuvres, moving towards plated dishes, and then finishing with some dessert.

This spirit is not entirely by accident.

After cooking at the highly acclaimed Tapawingo in Ellsworth, Michigan, Brioza and Krasinski began a highly successful run at one of San Francisco’s great power restaurants of the 1990’s and 2000’s, Rubicon. Behind the vision of restaurant executive Drew Nieporent and the all-star sommelier Larry Stone, Rubicon was a showcase for some of the nation’s youngest chefs to make a name for themselves, and then go off on their own. When Brioza and Krasinski had just started at Rubicon in 2004, I enjoyed one of the finest meals I can recount in San Francisco. Immediately, everyone started asking themselves, “Who is this couple cooking up the magic at Rubicon now? From Michigan?” 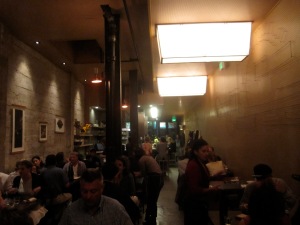 Sadly, Rubicon closed in 2008 (now Tyler Florence’s Wayfare Tavern…) and for three years Brioza and Krasinski cooked for private events, where dishes tended to be smaller bites with more of a wow factor, than what would be found at Rubicon. If I was married between 2008 and 2011, I certainly would’ve tried to hire this catering duo for the celebration dinner.

Now, they’re back in the restaurant game again. And San Franciscans, critics, and a whole neighborhood in need of some rejuvenation couldn’t be happier. The place has been packed to the rafters since last month being named by Andrew Knowlton of Bon Appetit as the country’s best new restaurant of 2012. No pressure, no hype.

You barely even notice State Bird Provisions when walking along Fillmore, far south of the affluent stretch of Fillmore in Pacific Heights. The restaurant’s dark, outer façade with a sign just saying “Provisions” and the ominous-feeling, tinted windows, along with the fact that lots of construction is going on nearby, make the restaurant just seem anonymous. This stretch of the often gritty Western Addition nudges right up to the Japantown suburban-sized shopping centers. Enter the doors and all of a sudden you’re already right by the kitchen, greeted by the incredibly hard-working and affable chefs, in a shoebox-size entrance area with eight counter seats for walk-ins watching the hard-working chefs. 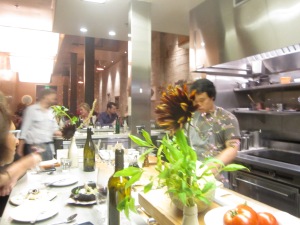 The back dining room seats roughly 45. While the kitchen counter is vibrant and colorful from beautiful flower pieces, the main dining area strikes you as harsh with muted lights, cold pillars, and strange geometric art on the walls. The one poster I did enjoy was a map with every state bird shown. Did you know the cardinal is the state bird for seven states? Oh, what you learn at dinner.

The slightly somber looking atmosphere is a complete contrast to the food Brioza and his team are presenting. And for the most part, dish after dish, the hits keep coming. 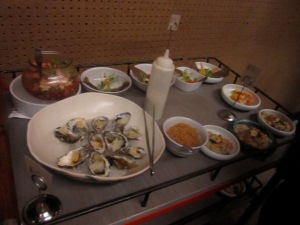 The meal is essentially divided into three parts. There are the “provisions,” essentially the hors d’oeuvres varying in size that come around on carts and trays, or if you’re by the kitchen, are offered to you from the chefs. At any point in the meal, you can order pancakes and “commandables,” which are more substantial smaller plates and require more preparation. Of course, Krasinski’s desserts conclude the evening. That is not debatable.

There are no duds on the menu, period. Yet, you almost expect from the looks and descriptions of the provisions that there should be a few more that absolutely bring down the house with eye-opening taste sensations. Duck liver mousse is the closest to a full-on knock-out, smooth as Elvis, glamorous, and powerful simultaneously when spread on little almond biscuits that are nearly identical to cornbread muffins.

Don’t think of skipping the guinea hen dumplings in a fragrant aromatic broth singing with curry spice. The meat inside the dumpling is spectacularly moist, a true feat of the dumpling arts. I could order several rounds of the raw halibut cubes and minced olives, eaten atop a nardello cracker. The pristine preparation perfectly accompanies the “still life” worthy mosaic presentation. Even a dash of purple from purple basil spruces the look and taste of the halibut. On its own the steak tartare would be a winner. Brioza teams the meat with shishito peppers, and the result is marvelous.

The most seasonal dishes varied. Marvel stripe tomatoes and sweet corn should always be served with smoked salmon, like done here. Yet for some reason salmon eggs don’t mingle well with green melons, goat milk yogurt, and a subtle curry spice. The eggs needed more salt and the melons were covered up by the yogurt.

I was slightly disappointed by the highly touted green garlic bread with burrata. The green garlic was barely detectable amidst the very doughy bread, almost like a savory funnel cake.

As impressive as the provisions reach, it’s the ordered dishes that steal the show. A “shortstack” of sweet corn and garlic chive pancakes thrive, sandwiching slices of Cowgirl Creamery’s Mt. Tam cheese. Or go for yeasted-sesame pancakes with local boquerones (sardines) and crème fraîche. Calling these pancakes is really unfair to them. You won’t find them for breakfast at the diner around the corner.

Brioza gives King salmon a fascinating preparation, covered with hazelnuts and mandarin oranges in a garum brown butter. The fish is drop dead gorgeous, almost a burnt orange color compared to the usual bright orange salmon. The earthy tones of the spicing, the hazelnut crunch, and the sweetness of the mandarins are spot on. I only wish for a few more oranges and hazelnuts, so that more of the salmon can be paired with them.

But really, it all comes down to the restaurant’s namesake: the state bird. Here in the Golden State, that would be the quail. Better known as a little chicken or the brain-less bird that always stands in the middle of my street, the signature dish is also the most hotly contested. My dining partner felt it was his least favorite dish. Other diners have panned it. On the other hand, some diners can’t stop talking about the quail.

Count me in the latter. The quail is actually the hands-down premier dish at State Bird Provisions. The secrets are the sharp parmigiano-reggiano sliced atop the bird, the perfectly timed cooking of the bird, and the scene-stealing crust composed of pumpkin seeds and bread crumbs. The stewed onions beneath complete the dish, totally worthy of having a restaurant named for it.

Krasinski’s desserts shine, in particular a cheesecake japonaise that is far more impressive than the slightly sloppy, scattered presentation. Tomato caramel and strawberries bring out the best of the black sesame dusted, free form, instead of sliced cheesecake.

Ice cream sandwiches are a great choice, here with chocolate-almond-plum ice cream. Or there is an epic double chocolate pudding with passion fruit and birdseed crunch.

Every diner ends with a shot of “world peace” peanut muscovado milk. I’m not sure if treaties could be made because of this milk, but it’s a far better choice than vodka shots. In the end, the shot is similar to soy milk, except with heavy peanut notes.

So, how about that dim sum-hors d’oeuvres style of service? I’ve never been a fan of dim sum style dining to begin with, because it rushes you to eat quickly, it panics you to order-order, and there is no anticipation when you just point and choose from a cart. When that cart goes by, you may never see it again. Once a chef presented me with eggplant fries and sungold tomatoes. It looked spectacular. Yet we already had a full house of dishes. I’m still worried those fries then went uneaten. The same with numerous other dishes turned down. The pacing is so incredibly hard to do for the staff and the diners, it’s hard to say the concept is worth those troubles.

Luckily, State Bird Provisions does swing by with a full menu towards the end of a meal to show what you may have missed out on. In essence, the whole dim sum concept then gets debunked, as you can just order traditionally off a menu.

On the positive side, this style encourages participation and lots of interaction between diners and staff. It’s really a hands-on experience. It’s not necessarily better than regular menus. It’s different and unique. And that is why we love restaurants.