There’s no need to compare Central Kitchen with its smash hit pasta and pizza centric older sibling a block away, Flour + Water.

The pair are owned by the same chef, Thomas McNaughton and his group ne timeas, and both have a razor sharp focus on the caliber of ingredients and preparations. That’s about it. They are two distinctly different restaurants with no intention of replicating the other’s recipe for success outside of the aforementioned similarity that are obligatory for any restaurant who merits impressive accolades.

A New Jersey native who moved west and decided that San Francisco’s fog (and sun those lucky few days in the city) was meant to be home. After years working in the high end kitchens of some of San Francisco’s well known chefs, including Gary Danko, Michael Tusk, and Roland Passot, McNaughton opened Flour + Water the summer of 2010 on a quiet corner on the outskirts of the not so quiet Mission District. After leaving my first dinner their shortly after its opening, there was no doubt in mind that at its price point, McNaughton was crafting the most rewarding dinners in the city. I hesitate to use the word “exciting” because that isn’t what Flour + Water is after. “Exciting” is for the pyrotechnics of El Bulli or the dare devil cuisine of the new guard of chefs that top horse meat with pork belly and ants.

In other words, restaurants are about eating and a good time in a comfortable environment. After several subsequent visits to Flour + Water, I still offer this stance in a city where there are hundreds and hundreds of worthy restaurants for your appetite and money. When considering all the factors and aspirations of the restaurant spectrum, Flour + Water is the best restaurant still in San Francisco. I say that because of the consistency and fulfillment of a meal there. That’s one opinion and of course everyone is absolutely entitled to their own opinion.

I’m not the only one who shares this adoration of Flour + Water if the nightly hour or more waits are any indication. And the awards and the press and the positive word of mouth…no pressure on McNaughton for the sequel.

In the restaurant business, there is no way to truly make a profit off of just a single restaurant. It’s the expansion from the original that provides potential profits. Isn’t that the goal of economics in the first place, profit? Everyone complains about the expansion of chefs meaning that they are selling their soul to the corporate devil. The chef isn’t in the kitchen, the quality goes down, on and on. But the chefs know, they need to expand. They just don’t always want to expand à la Alain Ducasse or Gordon Ramsay, to over-expand into cookie-cutter chains and ruin your reputation with vicious T.V. personas and lackluster, personality-less restaurants.

Then there is smart expansion. Think of Thomas Keller. Think of Michael Tusk. The French Laundry and Ad Hoc? Quince and Cotogna? Over in New York, look at David Chang with Momofuku Ko, Ssam Bar, and Noodle Bar. There is no mistaking the identity of all those restaurants. Each fully accomplishes its ambitions. There is no doubt that any diner would love to go to dinner at any of them. They are unique and different between original and the second and third restaurants.

For all expecting more sensational pasta and pizza at Central Kitchen, McNaughton knows better than to just replicate Flour + Water a block away. Central Kitchen is an expression of Northern California, where the produce dictate the menu, instead of the pasta and pizza running the show with the in season produce as sidekicks. The San Francisco dining scene is that much stronger for having a sequel to Flour + Water that is completely its own style of cooking and venue.

Case in point, take the dish with almond, hen confit, and peak of the season roasted figs. The hen confit could be right at home with a pasta dish at Flour + Water. The meat presents that rustic, slightly gamey taste of superb poultry, with a velvety texture that sous-vide so often strives for, and often renders into flabby rubber. What’s that with the hen? Is it gnocchi or some free form pasta from Liguria I’ve never heard of before? No, that would be summer squash, the perfect neutral foil to the crunch, sweetness, and tender meat of the dish.

Equally as accomplished and expressive of Northern California’s start of Fall, McNaughton’s cured salmon belly shines amidst a sea of purple hues: beets and huckleberries that contrast wonderfully with the slightly smoky, deep orange fish and crunch of toasted seeds spread about.

With these two dishes and all the dishes at Central Kitchen, presentation is impressive and not complicated. The salmon belly dish speaks of sea from the salmon, forest with the berries and the scattered twigs of the forest floor with seeds spread about. It’s Redwood National Park in a dish. Except since this isn’t Noma, the redwood branches were left alone.

Central Kitchen’s menu is tidy with six small plates, a trio each of larger plates, desserts, and what must be considered, bar snacks. Amongst the latter, you might find fried shishito peppers with a caper aioli or a brilliant riff on mixed nuts, with panisse cubes, fried chickpeas, and hazelnut, tossed in romesco sauce.

Interestingly, where Central Kitchen truly shines is when a dish takes one step outside of the comfort zone and becomes a bit daring. The most brilliant bites of the evening came from a salad of various tomatoes, then paired with “crushed” avocado, a blast of peanuts and peanut sauce, all then taken to another level with wispy ginger wafers. The flavors lean more towards Southeast Asia, but still fully embraces the local terroir. Northern California is quite diverse after all, it’s not just the Point Reyes coast.

More hen shows up as a larger plate, with smoked tomato, lettuces, and surf and turf arrives with oysters. The delicate hand McNaughton has with hen is apparent in its fellow fowl, quail. A quartered state bird is robust, far exceeding in flavor excitement its modest size. Apple slivers, a salsa like creation from spiced bread hinting strongly of cloves, cipollini onions, a hefty dose of sage, all scattered atop quinoa, speaks as much of Fall as pumpkin pie. Even the quinoa feels like November. But, it lacks the killer punch that can elevate it even higher.

The same with a very autumnal dessert of a wonderfully warm apple fritter with bacon bits, brown butter, and buttermilk ice cream. Everything speaks of a late September evening in San Francisco. But I left remembering a very enjoyable apple pie inspired creation from former Jardiniere pastry chef Lisa Lu. It was actually the ice cream that was the showstopper in a perfectly decent dessert that again, needed that boost to the next tier.

This leads to the almost insistent nature of the restaurant to partake in its tasting menu. Prices are reasonable for à la carte with not the smallest of servings. The leisurely, approachable vibe of the restaurant and Northern California as a whole seems to fit more with that format.

With all the uncomfortable emphasis on the tasting menu by the service, which by the way you can’t order from à la carte, it’s a shame the à la carte menu almost feels like it’s the second rate way to go. Despite the excellence of the service and the plates on the à la carte menu, you still feel like somehow you’re the couch passenger on this plane by taking this route.

While à la carte prices don’t go over $17 for small plates and $29 for large plates, there are far too few wines on the list for under $50. The wine list certainly veers more towards the elegant tasting room concept. That being said, be sure to try the mellow, balanced Auxey-Duresses from Burgundy, made by Oregon winemaker Evening Land, that is the envy of every Chardonnay maker.

The design of the restaurant competes with the caliber of what arrives on the plate. A heated front courtyard at the entrance, shared with McNaughton’s daytime Salumeria, boasts twinkling Edison light strewn overhead, and feels like dining in a spruced up greenhouse. The nearby fountain at first seems like it came from Italian palazzo. Upon closer look, the fountain is really a hydrant. Peaceful elegance meets urban grit. Welcome to the Mission.

The glistening kitchen dominates the back room, with an awkward “bar” for more casual seating directly opposite the kitchen. It’s awkward in that the bar watches the action in the kitchen and dining room, but is completely removed from both. It’s like you’re the air traffic controller overlooking the scene. Together, the restaurant features 22 tables, roughly divided in half between the courtyard and dining room. Somehow the dining room works with its handsome wood design. Do avoid the harsh banquettes that might enhance the room’s look, but certainly not your back’s comfort. 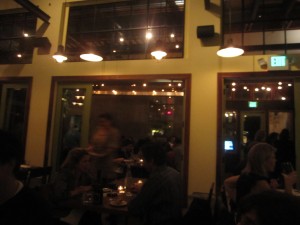 Then there is the issue of noise. Can you hear me over the music playing? Nope, I didn’t think so. I have a higher threshold for music noise than most diners. This was unacceptable. Conversations ebb and flow in the restaurant with the songs. It’s a party when the song is quiet and you can actually discuss something. Then there is a lot of looking around when the blaring rock returns. Do you want a tasting menu when you can’t hear what you’re even being served?

Outside of an initial cold welcome where one hostess told us to wait despite being on time for our reservation, service is incredibly efficient and leaps over hurdles to make your experience crisp. What a concept, the server actually smiles and listens to you. The recommendations were dead on. And despite a short off putting wait to begin, the other hostess arrived and apologized that we ever had to wait for our empty table.

Oh and a difference with Flour + Water besides the cuisines A reservation at a real eating time is actually possible here. With planning that is.

Turn down the music, decide a way to make ordering à la carte less demeaning, and let’s enjoy this wonderful new addition to San Francisco from a chef who continues to impress whether it’s via Italy or Northern California.