As the results come in on this Election Tuesday evening, let’s imagine a dinner put together by both candidates most beloved foods.

Start by with the finger foods, snacking on hummus and pita chips like Governor Romney would, and President Obama supports trail mix and chips with guacamole.

We start with Governor Romney and his favorite meatloaf cakes, with the recipe from his wife Ann. Governor Romney is also a leading advocate for peanut butter and honey sandwiches…does that count as savory or dessert? We’ll call it savory.

Then to the other candidate’s courses. The President loves chili, especially on cool Autumnal nights like this Election evening. He loves the half-smokes at D.C.’s famed Ben’s Chili Bowl, but you should follow the Obama family recipe for chili. Apparently, it’s President Obama’s favorite dish to make.

President Obama certainly loves his Hawaiian cuisine, whether it’s ham and pineapple pizzas or the plate lunches with pork, rice, and macaroni salad. The President is partial to the massive cheeseburgers from Ray’s Hell Burgers in Arlington, Virginia. Maybe tone it down with sliders instead to pace the tasting menu? 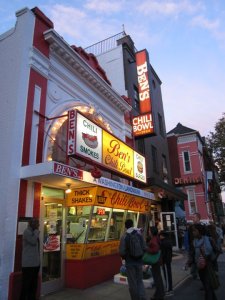 Even better than my menu here, I’d recommend following White House chefs Cris Comerford and Bill Yosses’ menu instead that was crafted for the Obamas this evening in Chicago.

Oh, to drink? Of course the new White House honey beer (or a vodka gimlet for the First Lady)! For the Romney’s…not sure. Certainly neither of those two drinks.