It’s the eve of Super Bowl Eve in New Orleans. Do you think a few people just might be strolling down Bourbon Street right now? Care to take a guess how long the wait at the bar for a cocktail is presently at Cure? My guess is a good hour to 90 minutes.

The dinner hour is presently ending in New Orleans, unless you’re planning on beignets at Café du Monde for a late dinner/ early breakfast, or whatever a 2 am meal is considered.

Looking ahead to prime dinner time Saturday night February 2nd, good reservations can still be found on OpenTable for parties of 2. A Mano, Coquette, Lüke (a CBD John Besh spin-off), Ralph’s on the Park, and MiLa all are excellent choices with availability. But, hurry fast. The list is impressive and extensive for those fully booked: Bayona, Cochon, Emeril’s, Herbsaint, Lilette, Pascal’s Manale, August, R’evolution, Sylvain, and Stella!. Not that that is surprising in the least. You can always gamble and try to walk into Galatoire’s…

Then again Sunday night during the Super Bowl, there is even less availability, with nearly all of these restaurants being somewhat formal and not having televisions. Are people not watching the game or are all the chefs closing so they can watch at home or attend the game? I don’t blame them.

If you’re not spending Saturday night February 2nd at Cochon or Bouligny Tavern, then certainly consider attending one of Super Bowl Week’s always special annual events: The Taste of the NFL.It’s the 22nd year now for this magnificent annual charity event with 35 chef stations, including one from each NFL city. Proceeds from the event benefit hunger related charities nationwide. Though the website says the event is sold out, it still appears to have tickets available.

The hometown will be represented by the exceptionally talented Tory McPhail of the venerable Commander’s Palace. I didn’t sample any crawfish with Cognac flambéed wild mushrooms and Creole cream cheese gnocchi when I last visited the restaurant, but you can count on a big line at that station. 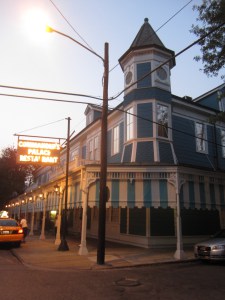 Interestingly, I’ve never even heard of the San Francisco representative’s restaurant despite being a Bay Area resident. Gaines Dobbins is the San Francisco chef, serving the not very San Franciscan dish of smoked brisket. The wine with the brisket, however, is the classic Napa and Sonoma legend Louis Martini’s Sonoma County Cabernet Sauvignon. I had been unaware of Dobbins’ new restaurant Eureka, but do certainly know his original Glen Park establishment, the superb Chenery Park. It’s certainly an entertaining New Orleans-San Francisco twist that Dobbins learned from the famed New Orleans chef Paul Prudhomme at Commander’s Palace back in the day.

It might not be the siblings Harbaugh rivalry, but it should be pointed out that the Ravens and Baltimore are represented by another Prudhomme disciple, Nancy Longo of the restaurant Pierpoint. I’ve heard of Pierpoint’s crab cakes before, so expect one of the night’s highlights to be from Chef Longo: blue crab gyozas with lemongrass oyster stew and leeks. Another twist- that blue crab in the Baltimore dish will be from Louisiana. It should be a perfect match with the Whitehaven Marlborough Sauvignon Blanc. But can Louisiana blue crab really work as well in the hands of a Chesapeake Bay area chef? I would guess absolutely yes.

How about the tempting pulled chicken and collard green posole from the Scottsdale, Arizona chef Eddie Matney? I’m sure it will score a lot more points than the Cardinals’ offense. Shin Tsujimura of Manhattan’s Nobu Fifty-Seven surely will score points than the Jets’ Tebow-led offense, with the chef’s salmon tataki with karashi sumiso. The other New York chef, Kamal Rose of TriBeCa Grill, is going traditional Cajun with Louisiana Gulf Shrimp Creole and dirty rice.

So, Peyton Manning couldn’t bring the Broncos to the Super Bowl in his hometown, but Denver’s Troy Guard of TAG Restaurant could win the city this Super Bowl title with a Colorado goat meat enchilada, brightened by a radish salad, and a Guajillo chile sauce.

For a spectacular dinner taste-wise and for a terrific cause, consider spending Super Bowl Eve at The Taste of the NFL.

We’ve always wondered what exactly is “confit?” Isn’t duck confit just duck meat aged in a jar full of fat? But, then we see lemon confit, and that can’t be aged in fat? Serious Eats has your definitive answers.

Earlier today we examined the superb wines of Soter Vineyards in the Willamette Valley, highlighting the exceptional non- Pinot Noir wines there. Now, here are a few tasting notes of Willamette Valley Pinot Noirs I enjoyed recently at area restaurants. The only winery visits of the trip were to Stoller and Soter.

From McMinnville AVA, Ayoub’s 2011 “Memoirs” has a sharp leading edge note of Bing cherries, with a Cabernet Sauvignon body that is plush and sports almost too many tannins. The floral nose is deft, while the rest of the wine is a few levels too pushy. Expect it to mature from these raw early days very impressively.

A visit to Paley’s Place requires a glass or bottle of the elegant Bergström 2009 Paley’s Place Cuvée, a classic expression of prickly ground pepper, boysenberry, and just the right amount of strength.

Hands down the best value of the Pinot Noir- heavy trip was a 2010 Carlton Cellars Pinot Noir called “Seven Devils.” It’s more on the lighter side, though that doesn’t hide its complex agave nectar and hints of passion fruit and forest soil.

I was less impressed by the Brooks 2011 “Runaway Red” Pinot Noir, showing that raw age of the Ayoub “Memoirs,” without the graceful cherry notes. Instead, the tannins covered the palate, leading to ash, sage, and dried figs. The “Runaway Red” was also the runaway lightest body of the Oregon stay.

We’re allowed to mention one Sauvignon Blanc, right? The J. Christopher 2011 Croft Vineyard bottling from the winery  in Newberg is a standout, with a much more powerful body than most expressions of this usually meager grape. Lots of exciting tropical fruit and hibiscus going on here, amidst a lovely shimmering silver hue. It’s a top tier wine for scallops from one of the Willamette Valley’s newer winemakers. Keep a keen eye here on its Pinot Noirs and various whites for years to come.

As mentioned yesterday, Sunday’s result will be 49ers 23 Ravens 17

Go 49ers and have a great weekend!