During my food writing days in Los Angeles, I spent many nights driving from taco truck to taco shack to taco truck, across East L.A., near Downtown, and all over Mid-City, sampling often very common renditions of street tacos. Sometimes a lengua taco would stand out, other times it might be a cabeza specialist, or an expert in the art of carne asada. The orders usually differed from place to place. Except, if there was the golden beacon of a vertical rotisserie spit evident. That meant there were tacos al pastor to be found. When al pastor, freshly shaven off the vertical spit, glistening with pork grease and pineapple juice, was available, that would mean you order a few tacos filled with it. No questions asked. It was my main basis of comparison for taqueria to taqueria. Debates in Los Angeles food circles about the premier al pastor rage with abundant pork-fille passion. At El Taurino with the killer spicy salsa? At Leo’s Truck? 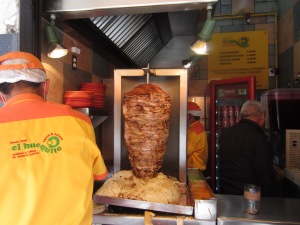 There will never be an end to that debate. Which then brings us further south to Mexico City, where it turns out that tacos al pastor is actually the unofficial dish of the Capital. Indeed almost every block of this massive city has at least two taco stands and the rotisserie spits light up the night like gaslamps do for Paris. Yet, when I researched for one al pastor stop on my quick, frenetic day in the city, unlike with L.A.’s debate, all signs seemed to point to one stop: El Huequito. In Spanish, the name means “the little hole.” The name isn’t kidding.

Tucked into the heart of the chaotic Centro Historico not far from the Torre Latinoamericana (“Mexico City’s Empire State Building”), you’ll finally spot El Huequito with its bright yellow awning, a portable table with two types of salsas and room for maybe three plates, and of course, the alluring rotisserie spit. I like to consider myself a “savvy traveler,” but I couldn’t find the place after numerous circles until I asked a very kind police officer for guidance. It turns out that I had been mixing up the street number for a nearby ceviche place with the street name of El Huequito. Well, I made it anyhow. 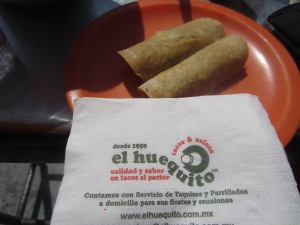 The options are pretty basic at El Huequito. It’s not whether you want tacos al pastor. It’s how many tacos al pastor you’d like. The only other question is deciding between a Mexican Coke or a Horchata to accompany the tacos. They’ve been doing one thing perfectly since 1959. Why change?It’s a quick drill. Each taco is roughly 85 cents. A small lunch can be made from three tacos. Each taco is filled with a few pieces of two inch long achiote marinated pork, then topped with a hefty helping of diced onion, cilantro, and diced pineapple from the crown of the spit. Add a spritz of lime juice and a dollop of fiery red salsa or the more subdued green salsa if you desire, after enjoying the first taco au naturel to best gauge the marinade’s nuances. With salsas added to the meat’s moisture, napkins become a necessity with a meaty-spicy pool of liquids dripping down your arms after two bites. It’s a small price to pay for such a treat of a taco. 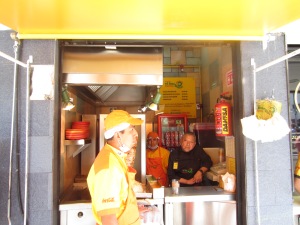 The al pastor is outstanding. Each sliver of meat is vibrantly seasoned, spot on moist, and tender. The only little critique are the tortillas. They’re not stale. They just clearly aren’t homemade, fresh off the griddle corn tortillas. El Huequito must not quite be shooting for the moon. We’ll forgive them. Nothing beats these tacos eaten standing up next to that sidewalk table with a breathtaking view of a television satellite tower that looks like Kubrick may have designed it for a film set.

The one difference with these “tacos” is that they actually are presented in a rolled manner by the man shaving the meat off the spit à la taquitos, as opposed to the customary open faced street tacos. Or, consider them the lightest, most un-filled burritos imaginable. Even the menu calls these “taquitos” interesting enough.

Al pastor is traditionally pork marinated a few hours in a base of citrus juices and chipotle, Arbol chiles, or achiote. Then the meat goes on the spit (known as a trompo in Mexico) with a pineapple on top of the trompo for the gas flame to draw the juices out of the pineapple down to the meat for additional moistness. The pineapple often gets diced and added to the taco for a little tropical twist. 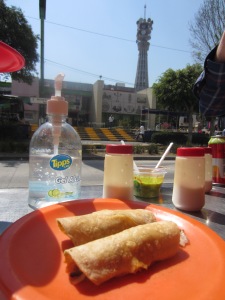 You might be saying yourself how this certainly sounds like Turkish döner kebab or shawarma from your favorite Middle Eastern cuisine restaurant. Well, yes it certainly is related to them. In the early 20th Century, Lebanese immigrants brought shawarma to Mexico and this is the corn tortilla filled- chile pepper marinated evolution of shawarma in Mexico. Another adaptation in Mexico is tacos Arabés with a pita replacing corn tortillas. 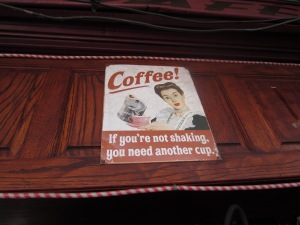 After a taco stop at El Huequito, walk across the street for the rare good cup of coffee in the city at Café Cordobes. Their highly regarded beans come from Cordobes in the state of Véracruz. The baristas won’t win any competitions versus Blue Bottle or Intelligentsia, but the beans themselves have a beautiful, light expression with a touch of kaffir lime. The adorable sit-down or stand-up café itself is worth a visit. 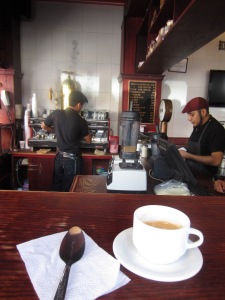 It’s the perfect lunch-time or afternoon snack-time duo. With all of the cars honking and the frantic pace of the Centro surrounding you, nothing provides an oasis of calm like a perfect taco al pastor, especially with a generous addition of diced pineapple. I guess then you really can call it a tropical oasis in the center of an urban jungle.