To fall in love with Sardinia’s cuisine, all you need to experience is a few bites of Massimiliano Conti’s spaghetti with bottarga and spicy olive oil. It doesn’t sound complicated and it isn’t. It doesn’t seem at first to be much more than a lighter sun-splashed, seafaring version of spaghetti and meatballs. But, my goodness the intensity of every dimension put together on this plate by Conti. I’ve heard stories of diners booking tickets to Sardinia the next day because of eye-opening dinners at the incredibly humble La Ciccia. I’m guessing a few of those diners officially announced those vacation plans immediately after encountering the spaghetti.

Conti makes all of his pasta in house at La Ciccia, his and his wife Lorella Degan’s ode to their home island. The spaghetti in the signature dish achieves that golden al dente texture, relaxed, flexible, with some bite to it. Most cooks would say it needs another minute of boiling. To Conti and chefs back at home, that extra minute turns high caliber flour and water into mush. If you want porridge or polenta, that’s a different story. 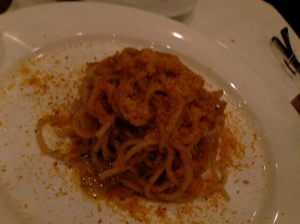 For correct al dente pasta, there must be a slight crunchy note. That allows you to actually taste and feel the pasta. It’s a participatory experience.

Then the spaghetti gets twirled atop a pool of chile- fortified olive oil, as seductive as an extra hour on a Mediterranean beach. You think the spaghetti is coated in a generous dusting of cinnamon or paprika, but really that rust-colored topping is the key ingredient to Sardinian cooking: bottarga.Consider bottarga the aquatic, common-man’s caviar of Sardinia. It’s served in or on top of what seems to be at least three quarters of dishes. No recipe doesn’t benefit from its added flourish. In Sardinia, bottarga is mullet roe aged up to five months. Elsewhere, bottarga comes from tuna roe. Like caviar, there is no texture to bottarga. It simply melts on the tongue, exuding a swift salty punch. The saltiness is more akin to an earthier red salt crystal than caviar’s high-pitched briny notes. Mingling with that exceptional spaghetti and spicy oil, accompanied by a Vermentino di Gallura, there you have your introduction to Sardinian dining that will have you hooked for life. 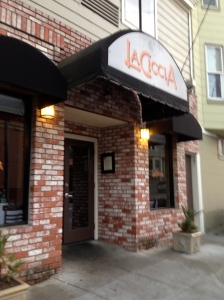 I hadn’t put much thought into Sardinian cuisine, or Sardinia for that matter, until I learned about La Ciccia a few years ago. Conti worked in the wine industry before switching gears and opening the restaurant in 2006. La Ciccia is a quiet restaurant from the outside in the sleepy residential neighborhood of Noe Valley. In other words, it’s a local spot you won’t just stumble upon. It could be considered a hole in the wall, but word is out. Plus, the brick exterior stands out amidst the nondescript townhouses. Diners from all around the Bay Area can be found here seeking a Mediterranean break. Very few restaurants abound. The only noise outside might be one of those dozens of Google buses driving down Church Street or the rumble of a MUNI streetcar. Otherwise, you could be on a Mediterranean island for all the sounds outside.

What makes La Ciccia so important to stoudy is how well Conti and Degan have found their niche. A common malady for restaurants is that they lack a distinctive voice. There is no clear narrative or story. The menu can be too vague and lack direction.

There’s no speculating what’s going on here. The theme is precise, right on point. Inside is a warm, bustling bistro that tows the line between energetic and romantic. There are about 40 seats for diner with a few other bar spots for sitting or standing, or if you’re really feeling the la dolce vita impulse, a mixture of both. Everyone is celebratory every night, even if the occasion is just Tuesday night’s dinner with some wine. Orchestrating the efficient, helpful service, Degan is your best friend, even if you’ve never met before.

I could say that such hospitality is rare, which it certainly is. It’s almost not really even hospitality, though. The vibe is so warm that the thin wall between restaurant and home begins to evaporate. I’ve been to my share of restaurants in Italy where “affable” is far from an adjective to describe the service. I’ve also seen my share where strangers become best friends and waiters kiss my family members as we leave, even if we’re not regulars. La Ciccia certainly veers towards the latter.

Let’s certainly understand that Sardinian cuisine is not innovative. It’s not particularly seasonally focused, despite it’s near idyllic, sunny every day climate. The island is actually extremely isolated, far off the west coast of mainland Italy. French-owned Corsica actually is the only remotely close piece of land, just north of Sardinia. Looking at the map, Sardinia is almost equidistant to Rome, Naples, Sicily, and Tunisia. It’s really its own place.

Being in the middle of the Mediterranean, of course seafood plays a pivotal role on the plate. Baby octopus gets roasted to tender interior , charred exterior perfection, with none of that rubbery tire texture nonsense. A robust pool of chiles and tomatoes serves as a “stew” for the octopus. This is such unfussy, yet exciting cooking. The only addition would be a spoon so you could actually eat the stew…like a stew. 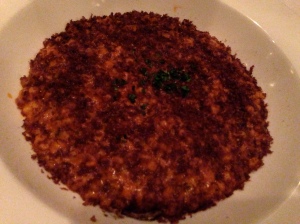 One night’s special was a terrific riff on caprese with soft burrata and tomatoes, enhanced by more bottarga, zesty arugula, and aged olive oil. The wafer thin Sardinian flatbread pani guttiau provided the perfect base for layering all elements together. Be sure to get some of the flat bread as a side for the rest of dinner as the banal complimentary bread for the table is the one afterthought from the kitchen.

Pastas are the powerhouse of the menu, exemplified by the spaghetti. Squid ink stained fresh linguine is every bit as memorable as the spaghetti, again magnificently al dente, tossed about in a shrimp and octopus dotted sugo. Semolina gnochetti works in stride with a hearty pork sugo for those San Francisco cold nights. Even heartier actually is the fregola in a sea urchin tomato broth. Fregola isn’t far from risotto in taste and more comparable to barley in appearance. A few bites is all you need to understand the middle of the road dish, slightly perked up by diminutive cured tuna hearts. For those expecting the riveting blast of umami sea urchin often gives, you’ll barely detect it here amidst the tomato broth. Quickly, the dish goes from decently comforting to lethargic. 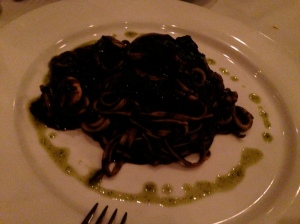 Not many tables go for the main courses, focusing on the pastas. They’re not dishes to just forget about, though. Roasted sea bream is enlivened by a bright olives sugo and you can have a messy feast of whole roasted wild prawns in a powerful garlic, parsley, and pepperoncino sauce. On the meat side, pan roasted and breaded pork loin comes with saffron onions, or a seared lamb tenderloin pairs with a peculiar sweet grape must, not unlike a Vermouth drizzle.

La Ciccia is a wonderful spot to opt for a cheese plate. Yes, the cheeses are from Sardinia. Even the honey is too.

Just don’t skip the cloud- light, soft as a sponge ricotta and saffron cake, sticky from honey, and crunchy from a generous scattering of slivered almonds. House-made gelato and sorbetto trios are always a wise idea for closing as well.

Ricotta and Saffron Cake served with Honey and Almonds

Degan’s nearly 200 label, entirely Italian, almost a quarter Sardinian wine list, receives high praise for its selection and array of price points. Chances are you’ll be clueless as to what get. Thank goodness for excellent service. I’m not sure how much of an expert you are with Nasco Malvasia or Pecorino Offida. No, the latter is not a cheese.

I’ll be heading to Sardinia for a bottarga filled holiday hopefully one day soon. I just have to dream that the dining there is as inspired as at La Ciccia. Foggy San Francisco is worlds away from Cagliari. The spaghetti with bottarga would be right at home, though, in the middle of the Meditteranean.

This entry was posted on May 13, 2013 by trevsbistro. It was filed under Restaurant Review, San Francisco .