It was a whirlwind weekend full of connecting, writing, talks, stand up paddleboarding and most of all, hour after hour of tasting for wine bloggers and winery representatives who descended upon Penticton, British Columbia, Canada. This was the fifth edition of the International Wine Bloggers Conference (WBC) and the first for yours truly.

Amidst the splendor of what must absolutely be one of the world’s most underrated wine tourism treasures, the Okanagan Valley, and its various lakes, an emerging wine region emerged to the global wine writing community. Who knew that Canada produced wines that don’t taste like sugar (or maple)? Well, a small part of the wine community did and bravo to them for choosing this formidable site as hosts. Next year’s conference is much more on the beaten path in “Sideways” country, also known as Buellton, California (Santa Barbara County).

With some 250 participants, plus numerous winery representatives, this was a real success in more than just trending on Twitter (not sure why this was a goal, but it was, and they succeeded in it). 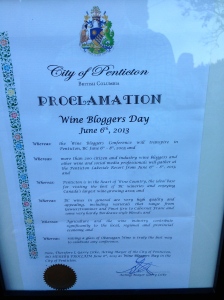 Tomorrow we’ll take a look at the real details from the WBC: the ten wines that really struck me as vital for everyone to know about. In the mean time, here are the crucial lessons I took back with me south of the border from WBC 13. Perhaps they might be worthwhile for you to learn as well!