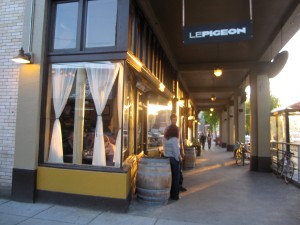 Is the name of this exceptional bistro along East Burnside pronounced with a French accent to the pigeon or as a mash up between French to start and English to finish? It is not an important question, seeing that the reservationist who called to re-confirm used the latter and the waitress leading us to the end of the snug communal table used the former. What the question represents is how appropriate the peculiar name fits the gutsy, bold cooking on display nightly in the domain of thirty year old Gabriel Rucker.

The setting oozes Parisian bistronomy, the new term for the young French chefs of the city who train with the masters such as Ducasse and Gagnaire, then continue that ambitious level of cooking at bargain prices in cramped, Ikea furnished quarters. Le Pigeon’s atmosphere is a step up in elegance from those dining rooms, with luxurious silk curtains at the windows facing busy Burnside to one side, a communal table that seats most of the diners leading to cupboards holding various knick-knacks and the bottles of red wine poured by the glass. The wall is composed of exposed brick with a gigantic mirror, giving the room an industrious effect counter to the elegant curtains, candles, and soft lighting that makes everyone look ten years younger.

Opposite the communal table is the open kitchen where no secret isn’t revealed by Rucker and his team. Diners can sit with a ring side view to the open kitchen, only you don’t have to pay the stratospheric prices that so many restaurants demand these days for the privilege of a chef’s table tasting menu (though anybody at Le Pigeon can order a five course, $65 tasting menu or a seven course, $85 one, both use items directly from the regular menu). For everyone who thinks that every restaurant kitchen possesses a foul mouth tyrant à la Gordon Ramsey and always flames dancing, smoke spewing, and the smell of over-cooked meat exuding out, then pull up a chair and watch this well-oiled, harmonic machine. If the cooks were in the weeds, we would have never known as they performed with the grace of a gold medal figure skater. 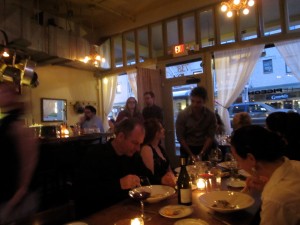 The menu and atmosphere follow the quirky nature of the restaurant’s title. The French le speaks of elegance and sophistication. Say hello to the beautiful glassware and the superb lobster-stuffed chicken in morel cream. The pigeon is of course one of the more goofy, in many ways not so intelligent birds, that are celebrities mainly because they are always in your way at the city park or because all it seems that passes through their mind is who will throw the next bread crumbs their way. There is this almost goofy element, or more a sly humor to Rucker’s cooking that makes an evening with him truly fun. It’s good to be in good hands, unlike the serious, tight rope feeling you get at restaurants of similar ambition.

Let’s start with pigeon, yes there is almost always pigeon on the weekly changing menu in some form, recently as a tartare in a soup style dish with a pecorino broth accented by spicy garlic and that beloved springtime produce, fava beans. Interestingly, Rucker is often assumed to be similar to a Fergus Henderson using every part of every animal in his cooking and like the Montréal chef Martin Picard of Au Pied de Cochon, who uses foie gras in dishes as often as salt. The only foie gras dish comes on a classic Rucker-humor dish, taking the classic diner special grilled ham and cheese Monte Cristo sandwich, using the not so American diner quality emmental cheese and duck ham with the foie gras, then giving it a seasonal boost from rhubarb. The sole offal dish was a brilliant grilled lamb tongue. The thin tubes of tri-tip tender meat is sweetened by a Calabrian jam, atop beautiful asparagus, and then topped with shavings of farm egg, in addition to more farm egg in the form of a yolk functioning as the cohesive sauce.

The masterpiece, however, is a riff on English meat pies using smoked rabbit inside the buttery flaky crust. The fork tender pulled meat bounces of sharp cheddar, sweet apricot, and a spectacular hot mustard ice cream that is exactly as it sounds, avoids melting too rapidly, and is the perfect component to round out a dish that should be taught to young chefs at the C.I.A.

Rucker didn’t need the C.I.A. or any cooking schools for that matter, opening Le Pigeon a little over six years ago. Like so many of Portland’s outstanding restaurants, Le Pigeon is on the OTHER side of the Willamette River from Downtown, where destination restaurants and world class microbreweries alternate blocks with regular residential homes. It’s a strange feeling to have such an urbane, top-notch meal and then walk away through dozens of homes. Last year Rucker opened a more traditional French bistro Downtown called Little Bird (no Le Quail?) that received a nomination as best new restaurant from the James Beard Awards. Rucker trumped that by winning the James Beard last year for the Best Chef: Northwest. Having eaten many meals at his competitors’ restaurants the past few days, I would give him the vote too.

You just don’t see brilliance emerge from the kitchen too often like the beef cheek bourguignon. Only the ingredients resemble the traditional hearty French stew, aside from the upgrade in meat tenderness to the cheek from regular chewy sirloin. A textbook Burgundy wine based broth serves as a pool for the single filet of beef cheek, accompanied by the softest of carrot cut like matchsticks and vibrant purple sweet onions. This is peasant French cooking through the eyes of Carême with the lightness of modern day restraint and ingredient emphasis.

Carême would approve too of the lighter than it sounds lobster stuffed chicken in morel cream with pillowy panzanella, more shreds of chicken, and peas, a dish that a dining partner had to order simply for this exorbitant sounding combinations. It works flawlessly. Not everything is a riff on classic French dishes. Southeast Asia is the inspiration for what may actually be the leading entree. Again, the tenderest of meat, this time duck medallions, lay atop a bed of long beans, with more green added from a green curry. The curry itself is so appealing it could be a lunch soup with a hunk of baguette. The crunch of peanuts and sweet cherry tomatoes round out the poem of a dish. Rucker can have a lighter touch too, with the fish of the day being an olive oil poached halibut that could have used 30 seconds less of cooking, with a few spring peas, and a nod to Mexico with a charred corn-black bean salsa on top. Slightly dry and a tad uninteresting, the halibut still was no mistake by any stretch. Vegetarians will get a dish each night too, this evening being a porcini quiche with a spring pea salad and gruyère frico.

As heavy as some dishes sound, this is not clunky eating. It is a very refined, muscular cooking. Desserts are obligatory and as heavy and outlandish as foie gras profiteroles sound, they are neither. A trio of soft choux pastry puffs hold foie gras ice cream in a bath of caramel sauce. A pinch of sea salt to each profiterole is the bass line to the dish, the final punch.It’s the pinnacle dish of the salty-sweet sensation that is captivating the world.

If there’s foie gras, there must be bacon somewhere. Yes, it’s hiding in the equally superlative breakfast as dessert bacon waffle doused in the syrup of the south, sorghum syrup, peanut butter whip, and maple not as syrup, but as ice cream.

More typical desserts are no less enchanting, be it a spot on moist carrot cake with chamomile ice cream or hazelnut semifreddo, given more decadence by a chocolate caramel sauce.

The French heavy wine list features several great deals, with many unique Burgundy offerings in particulars. Not many Oregon Pinot noirs are on offer, but to seek out the Boedecker Pinot by the glass or bottle, an excellent bargain from the urban winemaker just across the river in the industrial section of the city.

Service is very efficient, always there to answer questions, bus dishes, and even pour tastes of wine to help tie-breakers. The hostess seemed to be in a bit of a bad mood, never greeting diners or bid them farewell with a smile. Outside of that and a bit of a too long lull between entrees and desserts, the experience is as smooth as the beef cheek bourguignon is tender.

There is no way to truly describe the unique experience and brilliant cooking by Rucker. A perfect blend of classical French elegance and homey urban bistro, Le Pigeon is a whole lot more intelligent than its namesake bird.