Continuing along from Sitka & Spruce to…

Up Capitol Hill from Sitka & Spruce, chef Jason Stratton is cooking some of the most intensely focused regional Italian cuisine anywhere, at his little slice of Piedmont, Cascina Spinasse. The bustling pair of dining rooms and adjoining bar and patio were filled on a strangely warm Monday night, all enjoying the superb Italian wine list and tour de force pastas. Only a trio of pastas are offered each night and fortunately can all be ordered in half portions for sampling.

The signature tajarin, thinnest, mostly densely packed squiggles similar to angel hair pasta, comes either with sage or butter, or in a lamb ragu with tiny specks of lamb that don’t add much to the robust sauce. Much better were the tiny, fluffiest gnochetti with studly green chickpeas and the zing of a pure sage leaf, along with the lamb stuffed caramelle (think a meat pasta tootsie roll), served simply with butter and pine nuts.

An excellent seasonal and piggy way to start is the asparagus wrapped in a cloud of smoked ham, the beloved ingredient of Piedmont. The asparagus achieves an even softer texture than usual by being roasted then chilled. Interestingly the greatest bite of the night was the sardine ricotta crostini amuse-bouche, boasting miles and miles of umami. Rainbow chard frittata, fried trout, or the buttery soft 14 month aged Pio Tosini proscuitto di Parma all are fellow excellent starters. Only the poached, marinated Shigoku oysters fell below the mark. The oysters lacked the plump, briny taste you hope for and the geoduck sauce tasted of nothing in particular.

Unfortunately with just two diners, there isn’t much of a way to get beyond pastas and antipasti with room. With more people, the capunet stuffed with veal breast, foie gras, and pig’s trotter with a caramelized honey sauce or the better than they sound rabbit meatballs wrapped in caul fat are the route to take. Gianduja semifreddo is a rich, yet refreshing way to conclude, or better yet the excellent housemade limoncello. Since 2008, Piedmont has been the Italian region du jour for Seattle thanks to Spinasse. If Spinasse is any indication, you can’t get much better ham or pasta in Italy than you’d find in Piedmont. Luckily, Spinasse is a lot closer.

In shipyard industrial Ballard, Walrus & Carpenter from Renee Erickson of the beloved Boat Street Kitchen shares an old renovated warehouse with Staple & Fancy, the flagship of Seattle celebrity chef Ethan Stowell. Walrus & Carpenter is essentially what you’d get when marrying an oyster bar with a small plates gastropub. It’s a completely unique idea that works for the most part if service can pace out the plates a bit better. The age old small plates problem hit hard here with too many dishes all at once and then too long a wait with no dishes on the table. It’s a tricky issue to balance that unfortunately leads to cold dishes, forks flying, and ravenous speed eating.

Being mostly an oyster bar, you’d expect more from the lackluster Hama Hama, Treasure Cove, and Baywater Sweets varieties we sampled. All three were either too small to get much of a taste effect or simply lacking the delightful briny flavor of top tier oysters. The small plates are all over the globe, leaning toward Piedmont Italy for prosciutto cotto with green chickpea and mint or Latin America for halibut cheek ceviche, kicked up a notch by pastis.

I could eat the grilled sardines doused in an acre of parsley and a pound of walnuts every night. The same goes for the stellar potato gnocchi, holding the fort for the most rustic of lamb ragus, sharply accented by nettles and bold tasting parmesan shavings. The avocado tartine is a brilliant creation, dusted with cinnamon, and topped with carrot shavings. There’s spice, crunch, and the refreshing cool taste of avocado that makes this wild vegetarian combination sing.

Steak tartare topped with a beautiful farm egg yolk needed more seasoning and unfortunately a gorgeous, almost translucent scallop tartare gets overpowered by a dominating lemon cream. The cream itself would be great on bread, but not for the very subtle tartare. The dessert list is not as bountiful as the small plates. Nonetheless, you cannot and should not resist the sticky toffee pudding or the addictive roasted medjool dates with olive oil and sea salt.

Service is very helpful with advice on dishes to order and wines, but along with the mentioned pacing issues, just doesn’t seem particularly happy to have you there. There was some strange disconnect between the celebratory vibe of the dining room and patio and the servers. Often the most talked about aspect of the restaurant is the long wait since no reservations are taken. It seems as if the restaurant is all too proud to let you know that they are the popular crowd at school and you’re the robotics geek. At least the grilled sardines take away most of that sting. 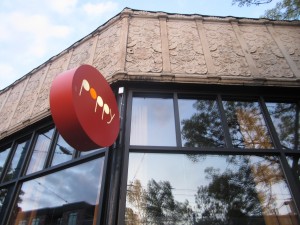 For something entirely different than anything you’ve ever tried, there’s Poppy. Jerry Traunfeld was the leading chef of Seattle at the very upscale Herbfarm in the eastern suburb of Woodinville. His ambitious tasting menus with the best of Washington ingredients repeatedly would be mentioned in the same sentences as The French Laundry or The Inn at Little Washington. Traunfeld was at the top of the culinary game.

Then a few years ago, Traunfeld dropped the haute cuisine at a prestigious dining room, packed up shop, and set up his own innovative riff on the Indian thali meal in a deliriously orange, swank dining room and bar in a somewhat gritty area of Capitol Hill, along Broadway. The thali concept is outstanding, essentially a miniature tasting menu served at once on one platter, aided by a few small plates beforehand such as a spiced fig, onion, and bleu cheese tart or an intriguing salad of avocado, grapefruit, and heart of palm with side stripe shrimp. The much talked about eggplant fries turned out to be a soggy mess, hardly crispy as they should be. The fries were clumsily seasoned by sea salt and honey, where most bites had neither, some were salt bombs, and some were cloyingly sweet.

The star of the show is the thali– the dessert thali that is. But of course before dessert, there are the seven or so thalis to choose from, either vegetarian or not, and seven or ten items. Each thali is anchored by one or two main entrees served in a slightly larger portion than its platter mates. For our ten item thali, it seemed each success had one somewhat lackluster effort. Herbed ricotta dumplings were pillows of beauty with sunchokes in a vivid green garlic sauce. Halibut was beautifully flaky, but its spring herb sauce was as boring as its vague name sounds. Cauliflower, saffron, and rosemary soup tasted of nothing but the final ingredient– think of it as cream of rosemary. On the other hand, moroccan carrot salad and mashed parsnips with vanilla showed Traunfeld’s potential. Best was a dainty gratin of savoy cabbage and oyster mushrooms, the lightest, smallest gratin you’ll ever have, where each ingredient mixes together with the creamy sauce and burnt breadcrumb surface. You’ll need extra naan too for all of the bread scooping. It’s some of the best naan I’ve ever encountered.

Cocktails sound fascinating, but the execution often lacks that final note which leads to a complete cocktail. The Papi Delicious has an excellent sweet-salty rim, but tastes of nothing but fire with the tequila, curacao, bell pepper, and mint completely covered by the jalapeno. The artifizz had a similar fate with the blackberry liqueur from Clear Creek Distillery in Portland giving an off, too bitter taste to the cynar and bubbly soda.

On with the show, the Oscar goes to the dessert thali. As grand and sweeping an array of irresistible sweets as Casablanca is a film, this is essentially a dessert of petit fours, with a central main anchor like with the savory thalis. Without hesitation, that anchor is the hot date cake with a banana gelato scoop, butterscotch sauce, and candied pecans. Feel guilty? It’s everything great about eating in one dish. The nutter butter squares in the thali will make you forget the stale namesake from Nabisco of your youth. Then again, the passion fruit pâtes de fruit send you to the palm trees of Kauai, the salted caramel truffles have a Pierre Hermé decadence, and the lavender hazelnut cakes give perfumed cakes a very good name. Want some popcorn for this joyride? The pandan lime sorbet does the trick, strangely tasting of…slightly buttered popcorn.

Servers are very helpful and hospitable, though our waitress had a bit of a way of delivering news and asking questions that makes diners feel squirmish and unintelligent. It’s a sort of awkward feeling that never puts you at ease at the table. That’s too bad knowing when Traunfeld clicks, especially with the desserts, in this very innovative concept, Poppy is quite the unique and impressive experience that is sure to be copied at a bistro near you soon.

We wrap up with the excellent croissants, macarons, and strongly vanilla-at the beautiful cusp of burnt cannelés from the excellent, oh so français bakery Honoré in a residential area of Ballard. Honoré’s bakery rival, also in Ballard, Besalu was closed during our visit for the birth of the owners’ child.

How about some baseball eats? Safeco Field’s superb beer selection will be covered soon. The eats aren’t so poor either, even if the Mariners still can’t hit beyond Ichiro and Montero (they actually won this game!). In addition to the Ichi-Rolls and Ivar’s fish and chips, Ethan Stowell has now revamped the offerings with his take on a local ingredient, In N Out style hamburger, or with what was a very worthy turkey, caramelized onion, red peppers, and gouda crepe. The crepe batter itself is terrific, slightly bitter like you hope for with a Brittany style buckwheat crepe that pairs perfectly with cider. The turkey was a tad dry, though the vegetables achieved a great sweet char. I only wish the crepes were made to order so they wouldn’t be so cold by the time you carry them half way around the stadium to your seat. Hey, this is a ballpark after all, not a cafe in Rennes. Why wasn’t I eating a hot dog? For a French take on ballpark food, this is an excellent creation by Stowell.

A visit isn’t complete without a stroll through the Sunday Farmers Market in Ballard. You won’t be able to leave without the molasses ginger caramel from Jonboy Caramel’s stand.