Seattle is quite possibly the most unheralded dining city in the country. Most of the Pacific Northwest attention goes to that Rose City to the south and is never talked about in the same sentences as the big boys of the Northeast, California, New Orleans, and Chicago. In fact the most talked about Seattle restaurant isn’t even in Seattle, but two hours north on the San Juan Island of Lummi at the Willows Inn, with its Noma alum chef Blaine Wetzel. Perhaps it’s because the chef personalities here don’t do Twitter tirades or spend more time in the T.V. studio than the kitchen. The celebrity chef of the region is Tom Douglas, whose empire started with the still strong Dahlia Lounge in Downtown and now has reached a dozen. Douglas might be third behind Bill Gates and Ichiro for fame in the city, yet that may change after he received the James Beard Award for Outstanding Restaurateur during our visit to the city.

Dahlia, along with stand-bys such as Ray’s Boathouse and Armandino’s Salumi (the office of Mario Batali’s father, home to a blissful porchetta sandwich) started the Seattle dining scene two to three decades ago and are still very much worth visits. The new guard is sweeping Seattle now by storm.

Dining doesn’t get much better than Revel in Fremont, a neighborhood just north of Downtown. Yes, diners revel day and night at the loud, celebratory Revel over the exquisite “urban style Korean comfort food,” by Rachel Yang and Seif Chirchi, owners of the just as exciting, elder, more upscale Joule in Wallingford. The short rib rice bowl with sambal daikon and the pork belly kimchee pancake are the standards, but this is a cuisine truly unto its own. A celery and fennel based salad gets a vivid technicolor and texture mash-up from salmon roe, lemongrass gravlax, and slivered purple potatoes so distinctly its color that you’d swear somebody colored them with a marker.

The stand out is a dish of seaweed flecked noodles tossed with Dungeness crab in a pleasantly spicy thai red curry broth that you stir crême fraîche into as a thickening agent. Everything clicks, leaving you in a breathless, wordless state of sheer delight. It’s the dish that perfectly represents the colorful mash-up that is Revel and Fremont, where no labels or cuisines can define the creativity and skill on display. Revel also happens to have some of the most gracious servers you’ll ever encounter, a rarity in today at popular restaurant that get nationwide attention. You will wait at dinner time, but it’s worth it. Just grab a drink next door at the terrific sister bar Quoin. I love coming here for lunch when the sunlight soaks the inside room, lined on one side by the open kitchen and the opposite a long banquette with various modern art, Picasso style paintings overhead. Do note the small, yet excellent selection of local beers and a thoughtful wine list to enhance these soaring flavor combinations.

The sleek, Scandinavian spare style design to Sitka & Spruce makes diners feel as if they are in a zen trance, thanks to the atmosphere and the purity of everything emerging from the open kitchen composed of the most pristine ingredients. A meal here will soothe the body and soul like an hour of meditation. Or it may seem like that during the peaceful lunch hour with the rare Seattle sunlight streaming through the industrial windows. At night, the wood oven roars to life, the crowds pour in, and Sitka & Spruce becomes a big city bistro. 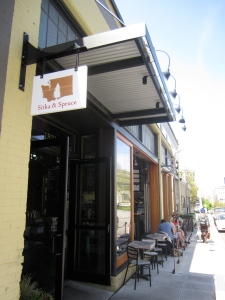 Atmosphere aside, the only real difference between lunch and dinner here are the three or so wood oven roasted meats and fishes from chef Matt Dillon, quite possibly the Alice Waters of Seattle in terms of his importance and emphasis on seasonal, local cooking. The day of our lunchtime visit, Dillon won the James Beard Award for Best Chef: Northwest. Beard himself would have adored the marinated anchovies from the Oregon coast, accented by a lemon spritz. 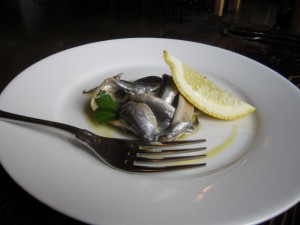 None of the dishes are complicated, often common combinations with a sight eye-opening tweak, and none fail to be nothing short of outstanding. The smoked sturgeon is mandatory if it’s on the menu. Pairing with salted parsnip and a bed of green lentils, the often forgotten white fish pairs magically with the light sauce grebiche, a classic mayonnaise and egg based French sauce, usually served with tête de cochon. Equally lovely was a vibrantly colored beet salad with walnuts and breadcrumbs. I can’t explain just how vivid the beet-y beet flavor was or how the breadcrumbs had more girth and substance to them than usual. Only the anchovy dressing for the salad didn’t thrive, which seemed to be missing any taste of anchovy.

Do order bread homemade most days) with the softest of butter flecked with maldon flake salt and as strange as it sounds, the sweet-savory yogurt. Yes, yogurt. Yoplait fruit on the bottom yogurt this is not. The unsweetened yogurt gets topped with orange slices, poached rhubarb, and crunchy toasted quinoa for the ultimate, soul fulfilling brunch dish. It sounds bizarre. It is indeed bizarre, but in a good way. Don’t pass up the cookie plate for dessert.

Excellent service rounds out the experience and after dessert, mosey through the shops of the Melrose Market the restaurant resides in, a sort of mini-Ferry Building marketplace.