If you want a terrific cocktail, get away from the French Quarter is what I learned. For a city known for inventing and perfecting so many classic cocktails, from the basic Sazerac to the often complicated (or very basic) Hurricane, finding a worthwhile cocktail or beer from a bar not named Cure or affiliated with Cure became a steep challenge.

Cure has already been documented here, crafting what I’ll go on record as the premier cocktails in this city, and certainly a challenger for the best in this whole country. They are serious over there about the drinks, yet so relaxed in atmosphere. Cure is a breath of fresh air in the mixologist circuit. Luckily, the minds behind Cure have now opened up a second bar, Bellocq, on the Robert E. Lee Circle and St. Charles Avenue, near the Central Business District and a block from the World War II Museum. Bellocq is part of, but unattached to the Hotel Modern, forming quite the 1-2 drink and eat punch with the next door restaurant Tamarind by Dominique (Harrison Ford would agree as visited the restaurant the night I was there). The seductive lounge feel of Bellocq is more swank than Cure, a little bit more chic, intimate, and classic feeling with a grand piano in one corner and velvet couches in place of plush booths. While Cure evokes the trend of Prohibition era drinking without being a speakeasy like the rest of the cocktail world, Bellocq runs even further back in time to the late 19th century.

New Orleans photographer E.J. Bellocq is the namesake for the bar, who became famous for his pictures of madams in Storyville, the city’s old Red Light District. The sexual revolution theme is celebrated in the sleek, sexy vibe, the frequent burlesque shows, and of course the Bellocq photos that decorate the walls. While Cure focuses most on crafting intricate, multi-dimensional, thought-provoking wonders of cocktails, the 19th century theme of Bellocq is reflected drink-wise by its emphasis on cobblers– basic cocktails of a spirit or apertif accompanied by one or two elements, served in a frosted cup with a mound of beautifully manicured crushed ice, garnished with a few grapes and assorted fruits. Essentially choose your alcohol of choice, and a little juice or essence joins it in the cup. In the 19th century, drinkers either chose to not get smashed or got smashed very easily, so an apertif such as port or Cocchi Americano is a terrific base for a cobbler. I’d recommend the startling depth of a Madeira or the sweet nutty essence of Amontillado Sherry.

The cobblers go down quickly, yet don’t effect you like a real cocktail. That’s the point. You don’t have to stagger off the bar stool after every drink. A cobbler is an idyllic refresher on a hot New Orleans afternoon. It’s not a ground-breaking drink like the menu at Cure. However, this being a bar run by Cure, you can absolutely get an exceptional Sazerac or Cure-caliber, innovative cocktail as well. Great bartenders know how to make great drinks, no matter what century the bar’s theme is. Try a cobbler, then grow ambitious.

Hotel bars are often hit or miss for drinking. Usually the empty ones are a bad sign and the packed ones have something rolling. It’s the opposite in the Big Easy. Only eight months old, the Windsor Court’s new lobby cocktail bar is a cute, sliver of innovative mixology, with a heart of gold, and some fascinating ideas.

The execution by Christine Nielsen is outstanding too, it’s too bad more guests and visitors are unaware of her Andouille Bloody Mary or Lion Amongst Ladies featuring 2 Hour kumquat tequila. Pisco sours here are taken to the next tier with vivid beet juice, neatly decorated by an Angostura bitters checkers board design. It is both a healthful tasting and intense cocktail.

Upstairs in the Windsor Court, possibly the grande dame of New Orleans hotels, is the more luxurious, old school Grill Room Restaurant and its bar, The Polo Club Lounge. Drinks here are well-executed standards, with a bit more of a generic style than Nielsen’s drinks. The Negroni here is outstandingly balanced, but the ice cubes taste like what you would have in water at Denny’s. Moscow Mules here are terrific renditions, with a bracing bite of pure ginger, and do sample the Vieux Carré if you’re into that classic.

From here, it’s all downhill unfortunately. Sitting in the Hotel Monteleone’s Carousel Bar is one of the glorious bar experiences of this country, especially if you go for a ride on the moving bar (try this after a night on Bourbon Street…). The Carousel Bar is best known for inventing the Vieux Carré, yet their version goes overboard on the Benedictine, and pales in comparison to the Polo Club Lounge’s version. I could hardly tell the drink had both Rye Whiskey and Brandy in it, or Sweet Vermouth to add the necessary smoothness.

The drink tasted like a sugary bush. My first visit came when four, yes four, different wedding parties decided to celebrate here as well. The place was swamped, more crowded than Bourbon Street outside on a Saturday night. Apparently they were a bartender down to. Whatever the case, just allow fewer people into the bar. Something, anything to avoid the chaotic, unacceptable zoo the Carousel Bar was. Our waitress came to our table at her own whim, approximately once every half hour. It took 45 minutes to get a Vieux Carré. We did receive a complimentary cocktail because of the wait, an undrinkable Corpse Reviver than didn’t revive this experience.

Hoping for a better experience, I came on a quieter weeknight and took another spin on the carousel. The gentleman next to me ordered a Vieux Carré from the expressionless and wordless bartender. After a few sips he had the same reaction. This is the signature drink?

Luckily, the Sazerac Bar inside the Roosevelt Hotel makes a solid rendition of its namesake drink, though again too many dashes of bitters, making the drink a glowing red hue. Fortunately, the Absinthe dash and Rye Whiskey shine through, for a fairly balanced drink. Unbalanced would be the dreadful Ramos Gin Fizz, also supposedly invented here, a cream confection as flavorless and chalky as a non-descript resort piña colada.

The real reason to sip a Sazerac here is to absorb the gorgeous atmosphere, complete with Greek columns, oversize mirrors, and murals, once the former living room for Huey Long. One note to the bartenders who make an assembly line of Sazeracs like they do for Irish Coffees at the Buena Vista in San Francisco: don’t make four at a time if you cannot make the four drinks even quantity. My Sazerac was half-sized compared to the others. Not that I needed more. 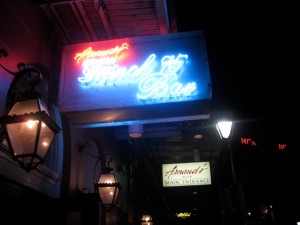 I certainly didn’t need any more of the French 75, the namesake drink for the French 75 Bar at Arnaud’s, one of the antique, old French Quarter society dining rooms. It’s a basic drink, completely out of balance with Cognac, Mumm’s Cordon Rouge Champagne, lemon, and sugar. Nothing clicks. Everything tastes of sugary champagne, hardly any Cognac in sight. Even more out of control was the Pisco Derby, mixing the Peruvian brandy with a lavender honey syrup, and grapefruit, for a puckering, potpourri drink tasting of candle. Lavender can brighten a cocktail, but is harsh with the unique, calm taste of pisco. I didn’t mind the very spirit forward Curari, blending booze, sweet, and bitter with Rye, Port, Amaro Cora, and orange bitters. Despite not being full, the same lack of attention from the servers and bartenders problem from Carousel Bar was rampant here too. Coasting on reputation was an adjective a bartender in the city at a much better bar used to describe these two classics. I can’t disagree.

Then there is the Bourbon Street Animal House known as Pat O’Brien’s.

It’s worth a visit for the massive outdoor courtyard atmosphere that feels like somewhere there should be kegs of Keystone. Pat O’Brien’s happens to be the home of the Hurricane, one of the worst inventions in the long history of drinking. In theory, the drink is passion fruit syrup, lime, white rum, and dark rum. Who knows what Pat O’Brien’s uses for the drink, but Kool-Aid while camping is far better. The drink is the stuff of nightmares.

Not a cocktail bar, but to save yourself from the not enjoyable Abita brews everywhere in the city, a visit to the Avenue Pub on St. Charles is mandatory. The upstairs balcony is terrific at night, or stay ground level in the intimate pub. The bar has over 40 taps, running all over from Belgium to Mikkeller to a watery, bland sweet potato flavored Jefferson Stout from Mississippi’s Magnolia. Luckily, you never can go wrong with Unibroue or the Bayou Teche LA-31 Pale Ale.