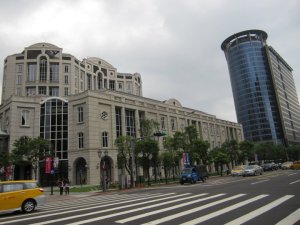 This time last year I was sipping a mai tai inside of a New York inspired cocktail bar inside of a Las Vegas influenced Italian palazzo shopping center in Taipei, Taiwan.

Indeed, that mash up of cultures envelops the senses inside the Bellavita Shopping Mall, which in theory is not a neighborhood in a civic government sense, but really is a distinct tiny community in its own right. It’s a community of Hermès, Tiffany’s, Jöel Robuchon, and Taipei’s Lamborghini dealer.

Taipei is a truly underrated city. From its extremely efficient and clean subway system to its distinct, diverse neighborhoods, and for our purposes, an enviable food culture from eating stinky tofu and “frog eggs” at night markets to the classic beef soup and multi-course, pastry heavy breakfasts that have now made their way towards Europe and the U.S. Then there is always boba tea and Din Tai Fung’s xiao long bao dumplings. The former is in theory Taiwanese, but that is always up for debate. The latter is a Shanghai originated specialty that acquired worldwide fame from a restaurant chain that perfected the dumpling art, where its original location is in Taipei. 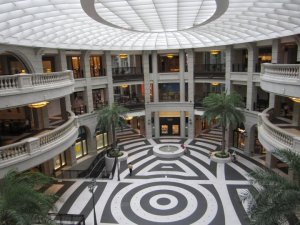 In Taipei I ate the classics, stinky tofu, beef noodle soup, and much more. I also had a late night dinner by an Infinity pool at the W Hotel that consisted of salads and flatbread pizzas, a Cantonese banquet complete with shark’s fin on the 85th floor of Taipei 101, and all you can eat Japanese sukiyaki. It all sounds a bit like Las Vegas, does it not, without the gambling, and a bit more of a local flair?

What stood out most was Bellavita, in the heart of the modern city sector not far from City Hall, the boldly designed W Hotel, and the impossible to miss Taipei 101 looming above everything. The area resembles a sprawling, open Right Bank of Paris with a few modern skyscrapers. In theory, Bellavita claims that its concept started as merely wanting to be a coffee shop. Yet somehow an entire luxury galleria sprung out of this idea, complete with six above ground floors, two below ground floors, and a ground floor atrium complete with a glass enclosed roof. Immediately I thought I was in the Villa Vezcaya Mansion near Miami, a direct attempt at being a massive Italian palazzo. There is the requisite center fountain and chess board marble floors.

For food purposes, you’re covered in the 2nd basement floor. Taipei and Tokyo’s upscale shopping malls and mega stores make American food courts look like the catering for  a two month long hike through Alaska (then again, nobody tries to defend American food courts). There is effort, creativity, and quality everywhere. There is an oyster bar, all sorts of fresh noodle bars, a sushi bar, and even a wood fired pizza oven spot known as Fat Angelo’s…sounds right at home at an American food court, but it really wouldn’t be. There is a wine store, gelato made by a purveyor called Felice, and the stand out, an outpost of Sadaharu Aoki’s East meets West pastries such as matcha mille-feuilles that Tokyo and Paris have fallen in love with.

The next floor up is anchored by Lamborghini and the Lamborghini of coffee shops, Starbucks. Somehow Starbucks has mentioned to acquire that luxury branding…not sure about that after a sip of the espresso. The first to fourth floors are mainly glitzy, Right Bank label shops. On floors one and two, A Cubed is a chic, modern cocktail bar-restaurant with a surprisingly impressive wine list. Unfortunately the mai tai I drank at happy hour resembled the common fake pineapple mix Trader’s Vic’s convinces the public of as being real mai tais. Still, it was quite the surreal setting for the mai tai. If only the the deep, horseshoe personal booths that serve as chairs weren’t meant for Shaquille O’Neal to sit in them. The other unfortunate part was learning that Taipei must not really do happy hour. You don’t want to be the only ones getting happy at 7 pm.Then again on the fourth floor, nobody was enjoying happy hour either at Haleakala, a Hawaiian plantation themed spot that seems like an exact replica of the Duke’s Canoe Club- Kimo’s restaurant group. I decided not to try the mai tai here, but it probably would have been so much more authentic, right?

It’s really the Jöel Robuchon show here in Bellavita. His salon de thé is packed every afternoon at pastry hour on the third floor and his L’Atelier on the fifth floor books over a week in advance. I didn’t have a chance to make a spur of the moment, same night reservation. Like the other Ateliers, the dining room is a very moody black and red, with the mostly seating sushi bar style, aside from a few other tables. The bites are small, mingling the East and West that Robuchon is so known for. After a mini retirement, Robuchon has come on strong with restaurants all over Asia from here in Taipei to Tokyo to Macau to Hong Kong.

The fourth floor also features an Italian restaurant, necessary in Bellavita, Beata Té, and a Japanese restaurant, Ton 28, on the sixth floor.

The cuisine is impressive in Bellavita. It’s the juxtaposition of cultures being in a grand Italian palazzo-galleria, right outside the night markets of Taipei and the imposing Taipei 101 tower. You could easily be in the hills above Florence. Or Las Vegas.