On this Thanksgiving Eve, Autumn is very much on the mind of everyone. Well, maybe not as much if you’re in Los Angeles where it still feels like late summer.

The days of pumpkin this, apple that are soon fading into snowy winter days, so let’s celebrate a strike of an Autumnal cocktail from The Spare Room, one of two exceptional cocktail bars inside the Hollywood Roosevelt Hotel (the other being the Library Bar just off the lobby where the focus is on produce-centric, omakase ordered cocktails).

The Spare Room indeed has two lanes for your bowling and drinking needs. I didn’t drop the $100 for a lane to see if a cocktail might make my bowling shots go straighter, as they usually curve quickly to the gutter. It’s a hidden speakeasy, except not underground, and about fifty times the size of one.

The year-old Spare Room’s cocktail menu is divided into seasonal cocktails (think an Old-Fashioned with cranberry cordial) and revamped classics (the Penicillin becomes the “Amoxycillin” with Amaro added).

Using Bonded Bourbon as the base, the “Running Leap” is an absolute stand-out. Served in an antique tumbler with three chiseled rocks that never melt away to dilute the drink, the usually ho-hum pairing of apple cider and bourbon gets a new life here courtesy of a house-made rosemary liqueur. Maple syrup adds some body and sweetness, then a spritz of lemon helps calm the rosemary’s edge. It’s all shaken up and presented on a paper maple leaf, with a garnish of apple chips.

Wow, the drink boasts quite the aroma of…rosemary? Maple leaf? In fact, the faux maple leaf has been sprayed with the essence of fallen leaves, possibly foraged in the nearby Hollywood Hills. I’ve never smelled better in a bar before. 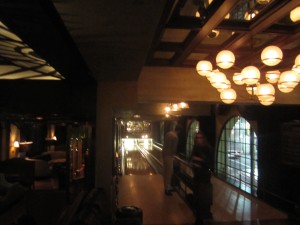 It sounds like a cliché modern mixology moment. Yet, the sensation of smell-sip-smell-sip with the leaves’ bouquet and the rosemary kick to the bourbon is exhilarating. And oh so autumnal. This being Hollywood, it’s almost a dreamy, intoxicating-to-the-senses experience.

As the leaves fall, turn them into a spray. Then craft a rosemary and apple cider based cocktail to serve on a leaf scented with the spray, and it might be just as impressive as bowling a strike after enjoying one. I’d run or leap for “The Running Leap.”