Yes, this is mixology, but it’s mixology like the molecular gastronomy Voltaggio displays in the kitchen. Instead of trying to shock with foams and gels and powders like is often the case at his prior place of employment, The Bazaar by Jose Andres, Voltaggio uses these elements to subtly enhance a dish, not for a pizazz or novelty factor. 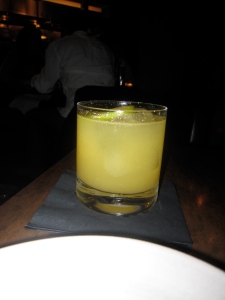 The cocktails have all the hallmarks of the craft cocktail, mixology movement, with assorted house made syrups, freshly squeezed juices, and whimsical creations that often have two or three ingredients you’ve never even heard of.

Except, Ink isn’t going for the pre-Prohibition era style that is so in vogue with bartenders today. There are no Manhattans or a new style Martinis on the menu, though that could probably be concocted on the spot.

What you have instead is a menu of name-less cocktails, driven by spirits, then filled out for a complete drink, much like Voltaggio does house made Doritos, miso, and nori  to a formidable corn porridge. Many of the cocktails could compete for the best in Los Angeles. Good luck choosing one. However, the decidedly simple sounding present Tequila-based cocktail may be the Tequila-based cocktails all others in the country should be compared to.

Consider it the most balanced, dreamy Margarita possible, tasting of fruit, spice, smoke, and sweetness that even the finest of Margaritas never achieve. The bartenders would not part with the ratios in the recipe given to me, only yielding the ingredients on the menu. On an outsized, single chiseled rock in a tumbler, garnished with a lime, the radiant yellow hue with a touch of gold to the palette presents a formidable drink. Here we have Tequila mingling with a touch of Mezcal, muddled jalapeno, passion fruit, lime, and agave. No ingredient doesn’t show up on the palate, yet no ingredient shoves aside its teammates. The jalapenos glow with the perfect amount of kick, the passion fruit adds depth and ripe tropical fruit, without being syrupy or cloying, and just enough lime and agave add sweet-citrus-tart balance to the equation. And to round it out, the gentle, romantic smoke from Mezcal that shares some of the spirit base with its agave brother Tequila

It’s a mysterious, name-less cocktail that is also incredibly approachable. Call it the “Perfect Margarita,” but really, this is a Tequila cocktail in its own league.