What a year for eating…and drinking. With several wine tasting and beer tasting excursions, along with the enormous improvement and excitement of cocktails, wine lists, and beer lists worldwide, choosing a dozen to represent the hundreds of worthy contenders was a very thirst-quenching, but far from easy task.

From espresso that tastes of Pinot Noir to Oregon Pinot Noir to a cocktail based off nasturtium greens, presenting the finest sips from a year of many spectacular drinks. 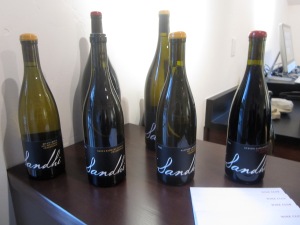 Of the three Chardonnays currently offered at Sandhi’s brand new tasting room in Los Olivos, this 2010 Rita’s Crown is the runaway beauty, exuding a gravitas of the Princess at the ball. Thoroughly well-rounded, plush with tropical fruits, notably hints of passion fruit and guava, the Rita’s Hills is captivating and refined, with plenty of edge to keep matters exciting.

If only all California Chardonnay could display this finesse, hands down the year’s finest white wine.

The bartenders at San Francisco’s leading urban taverm stick to the classics done precisely with the highest quality ingredients. No foams, cosmos, spheres, and such here. Lots of places claim to do this, few actually achieve Bar Agricole’s caliber of results. It doesn’t get better than this classic, almost modernist for the bar’s standards.

Served up in a handsome bronze color, this majestic Negroni in spirit driven offering sports both regular Brandy and Denver’s Leopold Bros.’ Peach Brandy for a touch of sweetness. The fennel addition from absinthe and caramel notes of Cocchi Americano complete the magnificent drink. Perfectly balanced and not too strong, this is an idyllic cocktail pre- or even with dinner. 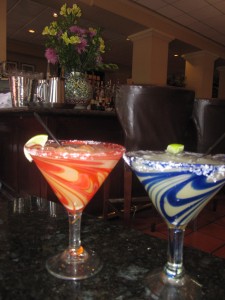 Really, a world class cocktail on the Riverwalk? In this land of frozen, worthless Margaritas meant for high levels of consumption to lift the night’s energy levels and have you forget about the 100 degree Texan heat, here is a blockbuster. Handsome and incredibly potent, leaning heavily towards orange flavors from Patron Orange and Grand Marnier to  mingle with the Patron Reposado or Herradura Tequilas, this is the definitive version of one of the country’s often very neglected definitive drinks. And it’s from an upscale, but sleepy hotel bar on the Riverwalk. Go figure. 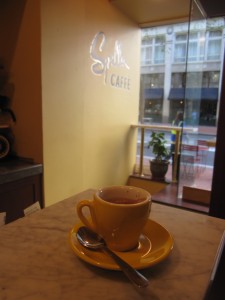 We had to throw in a non-alcoholic offering. In this year of hundreds of incredible espressos and coffee drinks, both cool and warm, picking one to be the flag-bearer has kept awake without the aid of coffee. Picking the leading espresso in Portland is far from a walk in the park, let alone the leading shot pulled anywhere this year. Even a café/roaster in Scottsdale, Arizona was a front-runner.

Alas, we’re still awake from all of these espressos, and I’d have no problem waking up each morning with the glorious shots pulled by Andrea Spella at his diminutive, impossibly charming slice of Utopia near Downtown’s Pioneer Place.

Spella used to operate out of a food cart nearby and now pulls his shots in a 180 square foot space that isn’t much larger than a food cart. The space screams of Italy, simple yet ornate with nothing much more than a machine, a cash register, and a one person bar by the stamp sized window. The key to top tier espresso is the crema, or froth providing structure, and then the depth of flavor. Spella’s shot thrives at both, in particular the thickest crema I have encountered. When another barista pulled a shot here for me on my follow up visit, the crema was only fair. When the master is in charge, the crema makes the shot almost like hot chocolate. Of course, as is appropriate, the espresso shot comes with the sidecar of sparkling water. That’s my first measure of espresso excellence. It’s a no-brainer at Spella.

We need more Spellas in this world. Every morning is infinitely brighter with a ten minute stop here. 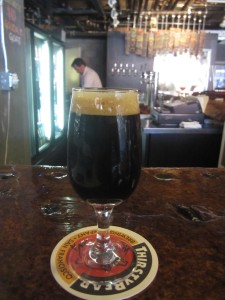 Get your pencils ready, the Indra Kunindra was originally brewed in 2011 with a home brewer in San Diego, and comprises of madras curry, cayenne pepper, kaffir lime leaf, cumin, and toasted coconut. First, the curry notes control the nose. The initial taste is numbing of cayenne pepper, similar to the Szechuan peppercorn’s “ma la” sensation. Curry spice then sweeps through, complete with the lingering kaffir lime leaf dominating the finish. It reminded me of Andy Ricker’s Thai cooking up in Portland, Oregon at the Pok Pok restaurants I (and the rest of the world…) adore, where bold spicing is not restrained, but everything comes together with purpose pushing you to the edge, but not stepping overboard. It’s all shockingly smooth and the finish is actually even refreshing. You’ll want water, but a fire hose isn’t needed.

It’s a thriller, alright. Indra Kunindra is a brilliant display of brewing finesse and creativity. It’s hot, it’s absurd, it’s a trip. You’ll even want a second round. 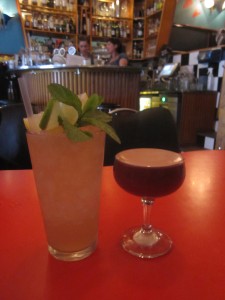 Hold on a second…1 cL of Bourbon to 4 cL each of Angostura bitters, lemon juice, and orgeat syrup? You mean, bitters are the driving spirit, not Bourbon? Now that is an upside down cocktail!

You betcha’. Everything works on this powerhouse, with vague hints of the tropics and Kentucky, the offspring perhaps of a Mai Tai and a Whiskey Sour. Don’t worry Bourbon-ites, the spirit isn’t hidden despite these proportions. There is no doubt the mixology circuit from San Francisco to Brooklyn has certainly arrived in the world’s most expensive city. This will make you realize that it’s o.k. to have more than a dash of Angostura bitters. 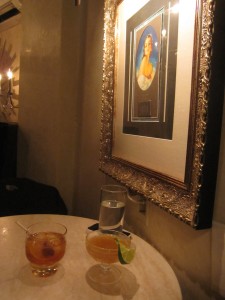 Ginger Rogers Cocktail on the Right

This mysterious “ginger cocktail” at this mysterious Capitol Hill speakeasy had no name and like all cocktails at Needle & Thread, was not on the menu. The only instruction was “ginger.” Wow, what arrived was no “Moscow Mule.” Equal parts Amaro Nonino, Amaro Montenegro, and ginger syrup, with a squeeze of lime, this is a thorough education in using Amaro for more than as a bitter aperitivo. The pair of Amaros dance with the ginger as gracefully as Fred with Ginger.

Created by Neal Bodenheimer, a thought-provoking blend of El Charro Blanco and Sombra Mezcal that finds an Adam and Eve- like blend of harmony, with a graceful union between the soft Mezcal smoke and the Tequila’s agave sweetness. Some spring freshness arrives from strawberry and an enforcing jolt of anise courtesy of the one and only Absinthe dash. A Mayan honey liqueur known as D’Aristi Xtabentun is the culminating touch. Possibly the best cocktail at possibly the country’s premier cocktail bar, keep this away from lurking bandits.

What a sensory experience. Del Maguey Vida Mezcal, Hacienda del Sotol Plata, Averna Amaro, and a barspoon of Combier Royal get combined in a large red wine glass without ice. Swirl the drink like examining a 1996 Cabernet Sauvignon. Then three small mists of Angostura bitters are added to the inside of the glass in an evenly distributed manner. Then don’t swirl the glass! Instead, flame an orange skin, rub it around the rim, and immediately serve.

Then you as the recipient immediately must inhale the fireworks of perfume coming forth. You’ll tear up a bit from the spice of the Mezcal. You’ll smell acres of orange orchards on fire. You hear your friend next to you applauding the bartender for this masterpiece presentation. You feel…brave.

The taste is smooth, elegant, and slightly strong. The Mezcal’s smoke is very apparent, but tamed by bitter Amaro. Everything compliments the other ingredients. It’s as stellar a cocktail you’ll find. No wonder it’s the house cocktail at one of the country’s leading cocktail dens.

You don’t have to be brave to enjoy this…just as brave as yours truly is!

Penner-Ash, a young winery by Lynn and Ron Penner-Ash located near Newberg on a breathtaking hill overlooking acres of Yamhill-Carlton AVA vineyards, with Mt. Hood poking into the horizon to the east, sure knows how to make Pinot noir. Released last August, the Pas de Nom is a true gem and very rare to find, being sold for upwards of $100. Only ten barrels of this Pinot Noir were crafted, using a blend of grapes from five different Yamhill-Carlton and Dundee Hills vineyards, which then are aged in four different French oak barrels, of varying ages and levels of oak.

Yes, the wine seems more complicated than calculus, which is why the name is such an appropriate label. This is truly extraordinary wine, the type that causes casual wine fans to become collectors. The tannins give the wine an elegant feel, only to become bolder with two or three years of aging. Some smoke mingles with the initial lush berry, leading to a gentle finish similar to the scorched top of a crême brulée.

This is the type of wine that changes your view of the subject. Without question, the red wine of the year. 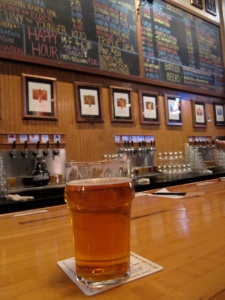 The “best beer in the world?” Worth a 4 hour wait in the freezing cold of February (by California standards)? I haven’t traveled to the ends of the world, across the seven seas, to every Trappist Abbey in Belgium, with the mission of discovering the Chosen Pint.

Indeed, the daunting to find, much hyped Pliny the Younger, the most coveted beer in the country, is truly sensational beer. It is immensely focused, hints of nutmeg and citrus in the aroma, and very strong without tasting in the least boozy at 11%. At triple the amount of hops than a typical IPA, the Younger actually seemed less hop driven than the double IPA Elder. Pliny the Elder strikes you as much more bitter and hop focused, a classic double IPA that every microbrewery now strives to replicate.

Yes, it was worth the wait. That doesn’t mean I need to do it again this year. But you never know… 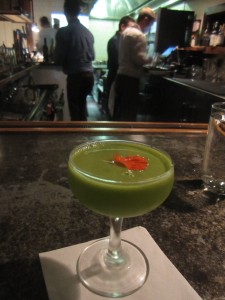 Nasturtiums? In our drink of the year?

Yes, as in the better known flowers, nasturtium is the base of this sensational cocktail from San Francisco’s new, riveting neighborhood restaurant, Rich Table. Designed by the restaurant’s beverage director Maz Naba, the drink promises a special evening ahead, if for any other reason than this cocktail’s enchanting notes and color, especially with the sardine laced potato chips you should be nibbling on with it. It is only appropriate in The Year of Foraging to have this cocktail represent the best of 2012.

The smoky, arguably most relentless in your face spirit used in the cocktail world, Mezcal is almost always the only note you taste in a Mezcal based cocktail. Not so much here. Served up in a chilled coup, the lush green hue from the nasturtium greens is what you first notice,  as green as the Ring of Kerry or the meadows of the Presidio, where the greens likely were foraged by Naba.

The nasturtium greens are blended with water and simple syrup in a 1 to 2 to 4 by weight ratio. Then the mixture is combined with a ginger syrup and lemon juice, for a perfect herbal, spicy, and acidic trio to tame the Del Maguey “Vida” Mezcal’s barbeque notes.

What a triumph, all crowned by the cherry on top; a nasturtium flower of course. Whatever may constitute a big night, the evening ahead will be a glorious one after commencing with this dazzling drink.