Is there anything more virtuous sounding than beet juice? Just think of the ills of the world that could be solved by drinking beet juice. So many nutrients could be acquired to brighten up so many days by pressing the violet juice out of those ugly, gnarly root vegetables. It seems like you could go run a marathon or start tackling bikram yoga when you embrace the power of beet juice.

Then, the sound effect of polluting such pristine, vitamin laden juice with spirits could be fingernails attacking a chalkboard. It’s almost a crime. What would be the perfect food pairing with beet juice? Quinoa and heirloom Nantes carrots?

O.K., enough on the fact that beet juice is very representative of yoga cuisine. Beet juice can be incredibly enjoyable, whether you practice yoga or ride Harleys.

In the other corner, yuzus evoke virtuous thoughts as well. The Mandarin orange-like citrus, common in East Asian cuisines (in particular Japanese), is treated with reverence in the hands of chefs and bartenders. Tender, petite yuzu segments carefully toe the line between sweet and sour, much more delicate to the palate than any other citrus. A few years ago on a trip to Tokyo, bartenders (known in Tokyo as “masters”) at some of the world’s most exalted cocktail dens, including Star Bar Ginza and Bar High Five, asked me if I would like to try a yuzu cocktail since they were in prime season at the time. I figured they knew best. What surprised me was how the yuzu cocktails each created were virtually identical and essentially pure yuzu juice. Spirit driven cocktails these were not. With a little Gin and sugar added, these were essentially a classic Gimlet with yuzu in place of lime juice. 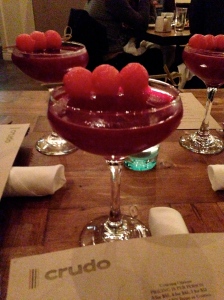 Halfway across the globe, I found myself on the patio of the gorgeous Jade Bar at the Sanctuary on Camelback, a spa- driven resort nestled at the northern base of Phoenix, Arizona’s iconic mountain. It must have been the coldest night of the year in the desert, causing us tourists to curl up next to fireplaces as if this were Alaska, not Arizona. A Hot Toddy would have been an appropriate cocktail.

Always on the lookout for the unique cocktails of a menu, I gave the Beet Yuzu Gimlet a chance, a perfect representation of a health-forward cocktail at a health-forward bar at a resort focused on your well being. I had seen classic cocktails re-interpreted to vastly differing results. Beets and yuzu? We’ll see about thatThe cocktail turned out to be far more than just a cocktail to make your spirit feel not so bad about imbibing. This was an extraordinary cocktail, with the yuzu taming the earthy beet notes, all tied together with just the right amount of juniper from the Gin. I always say that the two golden keys to a special cocktail are balance and a “catch.” Everything was smooth– just the right amount of sweetness and citrus freshness to control the wonky beet. The catch? Beet juice with the help of yuzu. A dynamic duo on par with Batman and Robin.

At the time, Jason Asher was the mastermind behind Jade’s bar. Jade was, and still is, that rare bar where the farm to table mixology movement yields both excellent cocktails, while preaching the glories of local, seasonal, organic, and such ingredients. The bar boasts a glittering chic atmosphere, with ravishing views and beautiful drinkers to match the cocktails. Both the people and the cocktails seem to spend lots of time at spas. If it weren’t for the cactus outside, this could be a hot spot on Sunset Boulevard.

Asher graced the cover of a special cocktail edition of GQ in 2010 and has been the principal force behind Phoenix’s arrival in the modern cocktail age. His Beet Yuzu Gimlet happened to win a national competition run by GQ and Bombay Sapphire Gin to become America’s “most inspired bartender” in 2010.

The typical Gimlet features an ounce of lime juice, an ounce and a half of Gin, and a teaspoon of simple syrup. Then it’s all shaken together and served up. That’s it. The classic three ingredient, shake, and strain cocktail.

Asher’s Beet Yuzu Gimlet substitutes the ounce of lime juice for an ounce of beet juice, with a little watermelon juice added if the beets aren’t sweet enough. Add in a half ounce of the yuzu juice, 3/4 ounce of simple syrup instead of the teaspoon, and the same ounce and a half of Gin (Bombay Sapphire of course…). Shake everything together, strain, and serve up with a one ounce splash of soda water, and some watermelon balls for a garnish.

It’s a masterpiece. Beets aren’t exactly symbolic of Phoenix, but for me at least, it was the cocktail to represent the Valley.

Recently prior to a trip to Arizona for Spring Training baseball, I had a moment of panic looking at Jade’s cocktail menu.

There was no Beet Yuzu Gimlet.

It had to be a misprint. Or maybe Jade just figured so many people order the cocktail there is no reason to waste menu space on it. Something had to give. This was like Harry’s Bar in Paris saying they no longer serve the Bloody Mary or San Francisco’s Buena Vista Cafe informing you they can’t make an Irish Coffee anymore.

So, I called Jade and asked about this dilemma. It turned out that Asher had left Jade to be the director of mixology with the Young’s Market Company of Arizona. With him, the Beet Yuzu Gimlet recipe departed Jade as well.

On my birthday night at Cullen Campbell’s exceptional restaurant Crudo (more on Crudo and dining in Phoenix later this week) near the Scottsdale-Phoenix border, I started perusing the cocktail list having heard that the cocktails were some of the most impressive in the Valley. I had my heart set on the “Tongue Tied,” only to soon be tongue tied myself.

The rest of my party and the service staff had a trick up their sleeves to fool me, not an easy task to do (yours truly might be a bit of a control “freak”). Out came radiant violet-hued cocktails served up, garnished with familiar watermelon balls. Could this be? Really? If the Red Sox won the World Series in 2004 after being down to the Yankees 3-0 in the ALCS, anything could be possible…

There it was in its magnificent purple splendor.

As it so turns out in his post- Jade life, Asher serves as a consultant for Crudo’s mixology program, with fellow former Jade bartender Micah Olson. The Beet Yuzu Gimlet is not on Crudo’s cocktail menu. It may or may not be in the future. This discovery came courtesy of a family member who later admitted to arranging something with Crudo before the trip and explaining my sadness over no Beet Yuzu Gimlet at Jade. That lay the foundation for this shocking discovery of the Jade- Crudo connection.

Olson had spent a good part of the day buying probably every yuzu in the city of Phoenix for the table’s drinks. What a birthday present. This was one of those acts of kindness that will never leave you.

Of course, we do need to mention the rest of Olson’s exciting cocktail menu, divided between seasonal drinks and the classics. You can go traditional with a Penicillin or a Boulevardier, or be courageous with the “Daring Dutchman,” mixing Bols Genever, dried apricot shrub, honey, mascarpone, soda water, and a Galliano float. It seems like the latter drink should veer towards an orange hue with the Dutch heritage and dried apricot shrub.

I did later get to try the “Tongue Tied,” an enchanting sweet and smoky number with Sombra Mezcal, muddled strawberry, Luxardo Abano Amaro, and a fascinating lime and lavender tincture. It was stellar. Dare I say it was every bit as stellar as the Beet Yuzu Gimlet?

Was the Beet Yuzu Gimlet as special as I remember? Indeed, indeed it was. Except now, it has taken on that mythical status of being much more than a cocktail. It is a symbol of kindness and a symbol of celebration.

Cheers to Crudo! Now, let me know what drink I can craft for you.