Downtown Napa is hopping these days. What once was a mere stopping off point on the road to the wineries and destination restaurants further north in the Napa Valley has become a dining destination every bit on par with heavyweights St. Helena and Yountville. The Napa River’s waterfront boasting Morimoto’s flagship, Tyler Florence, and, the carbon copy of the Ferry Building’s market, the Oxbow Market, is the focal point of activity, though it is by no means a Riverwalk à la San Antonio in terms of guests streaming up and down its banks with restaurants and bars left and right.

Much of Napa’s excitement is away from the river…and the wineries. Tucked away a few blocks up First Street from the riverfront resides a second, smaller slice of cosmopolitan activity, anchored by the SoHo chic Avia Hotel and the now two year old Oenotri. Courtesy of chef-owners Curtis Di Fede and Tyler Rodde, Oenotri presents a big city feel with that now very common, yet still invigorating style of California-American bistro (think Flour + Water or a Mario Batali restaurant with less guanciale) where handmade pastas, wood fired Neopolitan pizzas, and a sharp, limited selection of antipasti and secondi focused on high quality meats from big names like Niman Ranch and Willis Farm, along with the local, seasonal ingredients that are mandatory in this day in age.

This particular block of Downtown Napa has that now familiar re-gentrification faux Tuscany feel, as diners turn off the street into a small piazza alleyway leading to the entrance. Without a reservation, expect to wait here no matter what the night is. Impressive cocktails are crafted at the bar for those given wait times upwards of two hours or others tired of wine tasting. Interesting enough, the wine list veers heavily towards Italian wines despite this being a somewhat well known wine country region.

The 74 seat room can get quite deafening, enhanced by the prominent open kitchen and wood fired pizza oven that stretches one end of the room and grand floor to ceiling windows fronting the street on the other. There is both an open, modern feel and a cozy, bustling trattoria feel to the restaurant. Tables are particularly spacious, as if they were constructed for a Korean barbeque restaurant instead. Couples come here for romantic dates, big groups celebrate birthdays here, and then there are the few tourists who did their homework and found their way off the main stretches to dine here. The prime seat of the house to impress date would be the “pizza seats,” right in front of the pizza oven, where a pig skull eating an apple stares down at couples, and as our waiter put it, you can hear every word in the kitchen, most of which are not PG rated. 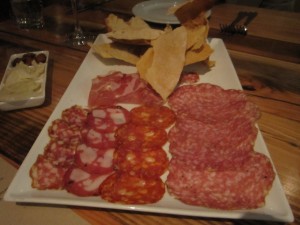 The menu is sleek and compact, with five selections each for pizza, antipasti, pasta, and dessert three secondi, a few contorni (side dishes), and then…some nearly two dozen housemade salumi. The salumi are outstanding all around, chosen at random by the chefs, with a minimum of six for the smallest platter. The sugar dusted almonds, cured onions, and cauliflower are as addicting as some of the salumi selections. Who even needs the meat with this supporting cast?

What is on the vaguely Southern Italy inspired menu tonight may be on the menu tomorrow, but almost certainly will not be in two days. Don’t have too many favorites. Pizzas probably change the least often, always anchored by the margherita. This being spring, green garlic and asparagus appears on one pie with hen of the woods mushrooms and parmigiano-reggiano. As the waiter promised, the pepperoni was some of the boldest, smokiest, most flavorful I’ve ever had, teaming with wood oven roasted onion and arugula for a bitter-smoky-sweet sensation that reminds me of the fabled Wise Guy at Pizzeria Bianco. Oenotri’s crusts are the highlight of the pies aside from that pepperoni, perfectly charred with a little thickness and puffy rings on the edges. The only issue with the pizzas, as is the case with many high heat blistered pies, is that the center isn’t fully cooked, causing it to become slightly limp and the ingredients quickly slide off. The pepperoni pie didn’t skimp on the wonderful meat, but some slices had no arugula to be seen.

With the salumi, a salad of some sort with produce from Oenotri’s four acre garden must be ordered. There was a fresh, seasonal shaved snap pea offering with asparagus, pancetta, ricotta salata, and Bergamot mint. Wood oven roasted young fava beans, the darlings of spring, are lovely with beets, pistachios, juicy citrus from the Oenotri garden, and sunflower sprouts, a dish I could eat nightly.

The heart of the order comes with the housemade pastas, each one sounding more enticing and complicated than the next. Chances are you will never have heard of any of the pastas themselves. Fregula? Radiatore all’ telefono (Yes, telephone shaped. No, you can’t call somebody with them.)? Fidei? That fidei is a thinner spaghetti twirled into a masterpiece of a dish with smoked mackerel, tomato, hot pepper and a shellfish brodo. The broth has the seafood intensity of the most soulful bouillabaisse in Marseille, with a layer of tomato added, pieces of subtle fishy mackerel flecked around, and the not too subtle blast from the hot pepper create true art work that makes a humble pasta dish into the extraordinary. There is no doubt already this dish will be one of the highlights of the year come December. you can’t go wrong though with ribbons of farfalle tossed with sugar snap peas and white shrimp, or red wine braised squid, manila clams, and gremolata joining fusilli.

Do order a side of fried cavalo nero (black kale) with lemon and shaved pecorino, given some heat from chili. It’s a truly addicting chip. Secondis revolve around whole-meat preparations, one night might be porchetta, another could be pork sausage with walnuts and red cabbage. Often the single fish dishes can be highlights, too. Big eye tuna from Morro Bay (it’s clean enough to fish there?) comes medium cooked but still flaky tender and moist, over soft gigante beans, and given an excellent boost from lots of mint and grilled meyer lemon, and the salty crunch of fried capers.

Hungry for dessert? Chocolate panini sure is enticing. Amongst the offerings including a lighter mandarin sorbetto with zabaglione, I went for the chocolate-espresso (emphasis on the espresso!) sformato, neither as rich as a mousse or as soft as a pudding. It’s simple and perfect for a few closing bites, if you like espresso late at night.

Service is very sharp and extremely friendly, almost over the top at times. More than once our waiter claimed that this dish was literally the best in the world, only to top it with the next dish being truly a dish worth traveling thousands of miles for. I would travel to the ends of the earth for that fidei pasta dish. The enthusiasm is welcome, but did border on being too far, almost comedic. Pacing is impressive given the hectic nature of the restaurant and the challenge of pacing several smaller courses. The only faux pas came in failing to deliver initial bottle of wine before the starters arrived.

Bold, loud, and gutsy, this is some exciting cooking at Oenotri. It’s firing on all cylinders and by way of Italy, leading the charge in Downtown Napa.