On this late April Monday, it’s snowing in Denver and still crisp Autumn weather in the Northeast. Spring hasn’t quite got the message yet that it was supposed to start a month ago (meanwhile it’s summer already in California).

Which of course then makes us think of Mai Tais and beaches in the tropics. Honolulu’s high today was a cool 82.

For this Monday’s neighborhood of the week, we say a very warm “Aloha!” to beautiful Kapalua, a resort area in the northwest corner of Maui.

Kapalua almost always is spoken in terms of golf with its 22,000 acres of luxury condos spread between the coast, two eighteen hole world-class golf courses, a golf academy, a Ritz-Carlton, and Highway 30 at the top of a steep incline to the east. Golf is in the air everywhere, you can’t escape it. Fortunately, you can be rest assured the courses are far enough from the beaches to not hear “Fore!” when sunbathing.

The PGA golf season’s first event, the Hyundai Tournament of Champions, occurs the first week of January each year on Kapalua’s Plantation Course (Dustin Johnson won this year). While the rest of the country is marching back to work through snow after New Years, the golf world is savoring the Kapalua sunshine and splendid views west towards Molokai. 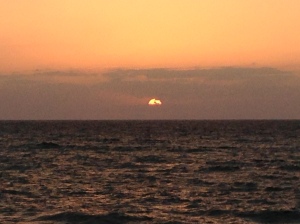 On Maui’s West Coast traveling north towards Kapalua you have the New Orleans-evoking charm of the area’s “town,” Lahaina, then the decidedly un- Hawaiian skyscraper hotel-resorts of Ka’anapali, followed by the more subdued communities of Kahana and Napili Kai (for our readers’ interest, the Maui Brewing Company’s brewpub is in Kahana). Then you reach our destination, beginning with Kapalua’s Bay Course, full of Cook pine trees everywhere, with views over Napili Bay.

Kapalua Drive splits through the Bay Course while to the north is Oneloa Bay. To the east of Oneloa Bay is Kapalua’s favorite beach and a great snorkel spot, DT Fleming State Park at Honokahua Bay. Office Road, a very peculiar name for a vacation resort’s major thoroughfare, runs directly into DT Fleming. At the intersection of Office and Kapalua Drive is the Ritz-Carlton and the Kapalua Villas. Highway 30 cuts through Kapalua next to the east, then hugging the coast, and below the highway is the Plantation Course.

Golf? Yes. Beaches? Absolutely. How about the dining?

Championship- caliber golf and equivalent dining aren’t exactly a guarantee. Pebble Beach has improved recently above par with chef changes at its restaurants Stillwater and The Bench. There is also a Roy’s at Spanish Bay. Then again, the signature dish for golfers at San Francisco’s Olympic Club is the hot dog shaped “Bill Burger,” and at Augusta National in Georgia, the pimento cheese sandwich.

At the Ritz-Carlton, the resort’s Banyan Tree Restaurant has been turned into “The Terrace Chef-Crafted Hawaiian Cuisine.” Yes, that is the name of a restaurant, not simply an explanation of its philosophy. John Zaner is now in his second decade as executive chef of the venue. For lunch at the Ritz-Carlton, visit the more casual The Beach House, and for your sushi fix there is Kai Sushi next to the lobby.

Across the lobby from Kai is the Alaloa Lounge with its striking molten lava bar backdrop. The drinks are far less inspired, mostly of the usual sugary, imbalanced fruit cocktails genre. The Mai Tai won’t garner any awards. Instead, try the somewhat more impressive  “Topless French Mai Tai,” the Mai Tai gone elegant with Domaine de Canton White Ginger Cognac, pineapple juice, and Korbel Brandy. If you’re expecting an elegant lobby bar, as is the case at many Ritz-Carltons, this isn’t anything like New York or London. The entertainment is ukulele music, hula dancers, and ESPN on plasma screen televisions.

Also on Office Road, you’ll find the popular picnic provisions market Honolua Store, next to the ever-crowded Sansei Seafood Restaurant and Sushi Bar. For years now D.K. Kodama has been taking sushi and making it completely the opposite of its pure, tranquil origins across the Pacific. Almost every dish is fried, spiced, or jazzed up in some manner to mostly very successful results. Tempura “shrimp dynamite” and a mango crab salad roll are two signatures. You get the concept. Sansei also is the rare spot outside of Lahaina that stays up late, especially Thursdays and Fridays.

The focal point of Kapalua’s dining scene is actually over at the Bay Course. Peter Merriman, one of the “fathers” of the 1990’s Hawaiian Regional Cuisine movement with Jean-Marie Josselin, Roy Yamaguchi, and Alan Wong. Merriman opened his first branch of Merriman’s outside of the Big Island in Kapalua five years ago, and many visitors consider it the finest of Merriman’s mini-empire. Let’s just say we hope it doesn’t have the issues we’ve encountered numerous times at Merriman’s Poipu on Kauai. I’m told the cocktails are actually worth having with some mixology efforts clearly on display here, a blessing in this craft cocktail desert and the fact that Merriman’s has a prime time sunset vantage point. I still don’t understand why Merriman’s does half servings of all entrées, yet prices differ by only about $7. It’s always seemed like a scam.

Regardless, Merriman does have a deft talent with the local fish that might be un- matched on Maui. Start with a Kalua pork and sweet onion avocado. Then share  crispy “day boat” mahi mahi with grilled Hamakua mushrooms and hearts of palm, and the butter poached Keahole lobster atop a corn cake with a charred tomato vinaigrette.

Meanwhile overlooking the Bay Course’s 18th Hole is the Pineapple Grill, Kapalua’s revelatory dining experience. The view is outrageous. The service is gracious and crisp, a rarity outside of Lahaina. The only drawback is the sterile, corporate vibe to the cluttered room. Only a few pineapple stenciled lamps and an extensive glass walled wine cellar lend some character. Otherwise, the place feels like a major restaurant group’s money-maker in paradise (Pineapple Grill is owned by Cohn Restaurants).

Isaac Bancaco, recently brought in from the Grand Wailea, is a gifted young chef to keep an eye on. The Ming Tsai protegé is giving big city, sophisticated dishes to the heart of tourist territory. What a breath of fresh air to see some ambition and execution in the vision. Scallops sit atop creamy miso risotto, edamame, and Japanese spinach, with a Tahitian vanilla brown butter, while freshly-made raviolis (more like potstickers in reality) filled with Kobe beef and (barely detectable) brie is the perfect companion to a Tahitian lime-horseradish gremolata. Even more impressive might be a timbale stacked with the very red duo of ahi tuna tartare and tomatoes, given the fishy jolt of tobiko, the crunch of macadamia nuts, and a maple-Meyer lemon emulsion.

Against the usual meal evolution, dishes actually improve even more from starters to main courses. Too often, nut crusted fish barely has any nuts noticeable. Not the case here. Bancaco’s signature dish has become a stellar ahi steak, thicker than most versions but maintaining a still perfectly ruby red rare interior from the searing, encrusted with pistachio and the twin spicy-earth sensation of wasabi peas. Then a wasabi-shoyu sauce and coconut scented forbidden black rice complete the masterpiece. Every element helps the other elements thrive. It’s a refreshing, refined style of Hawaiian Regional cuisine. It’s exactly what you hope to find in Hawaii and so seldom do.

Slightly less accomplished was the blue crab dusted monchong in a banal, oily lemon beurre blanc that covers any taste of the fish. The accompanying crushed Molokai purple sweet potatoes excited no palate, nor did the majority of plain monchong bites with no crab. The crab itself was great in the few bites you could enjoy it. At least double the crab is needed.

After nights of eating nothing but fish, tender braised Wagyu beef short ribs sounds like a treat. It is a blockbuster here. Regardless of being on a tropical island, this is a tour de force dish, almost as soft as polenta, enlivened by both a miso-mustard flourish and a green apple marmalade. Even the horseradish croquette on the side is more than you’d expect.

Really, the only little piece of advice would be to trim the menu by a few dishes. With an even tidier menu to channel Bancaco’s skills, The Pineapple Grill will be a destination for tourists from beyond Kapalua.

Dessert at The Pineapple Grill? You could try lilikoi cheesecake or the obligatory warm chocolate fudge cake. In reality, there is no choice. It will be the pineapple upside-down cake. Here is a splendidly moist tropical bread pudding, almost saturated full of Maui gold pineapple chunks, covered by the robust Bananas Foster evoking Hana Bay Dark Rum- caramel sauce. Toasted coconut is the “cherry” on top with some excellent macadamia nut ice cream.

The dining might not quite be a hole-in-one in Kapalua. However, with spots like Merriman’s and The Pineapple Grill, it’s definitely at least a birdie.