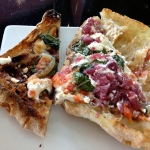 What a challenging question to begin this first full week of October with. Usually my answer is the always vague “follow your gut feeling.” Well, if you’re gut isn’t feeling so good, you probably want to send the dish back.

I’ve noticed I almost never have to send back food. Cocktails get returned at a far higher rate. Then at a seemingly innocent, low key lunch at the highly respectable Los Angeles restaurant/cafe LAMILL (also a terrific coffee roaster, located in the city’s Silver Lake area), I was forced to do something about this joke of a sandwich delivered to me. Something had to happen. Sandwiches don’t look like this for $7, let alone double the price from a kitchen owned by one of the city’s top toques. Just look at the sandwich “filling” to the left in the picture below. Nothing has been edited. Seriously. 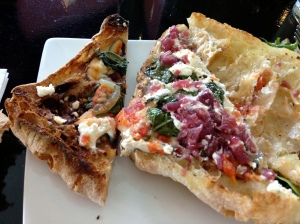 Note the difference between Sandwich A and Sandwich B at LAMILL

END_OF_DOCUMENT_TOKEN_TO_BE_REPLACED

Continuing back to the Windy City, we continue with a beverage to commence our concluding Part II from Chicago. 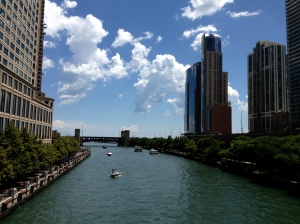 Cocktail of Chicago: The Office: Rum, Ginger, Bonito, Wasabi, Sesame, and Mint
Don’t make me choose between The Aviary and The Violet Hour, Chicago’s pre-eminent craft cocktail bars that are deservedly on every “ten best cocktail bars in the country” list. So, I chose a cocktail not really from either.
Looking at my list of cocktails from this trip, I can’t believe I managed to run a half marathon in Minneapolis during my brief stay in the Twin Cities book-ended by two half weeks in Chicago. What a champion! Or such is the life of a runner-food writer?

Chicago is a great cocktail town. The Aviary gets the headlines around the country for being the cocktail circus extravaganza of Grant Achatz and Nick Kokonas (Alinea, Next). Charles Joly now runs the show nightly at The Aviary, named in May by the James Beard Awards as the country’s most outstanding bar program. 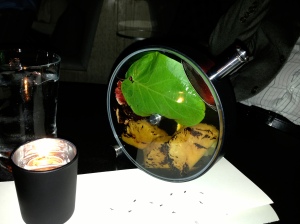 The “Tropic Thunder”‘s porthole at The Aviary

Is it really? Well, it’s probably the most fascinating. And the drinks are both eye-opening and almost always excellent. But you’ll go to The Aviary as your neighborhood bar like you’d visit your local neighborhood bistro Alinea. It’s an experience. What an experience it is. END_OF_DOCUMENT_TOKEN_TO_BE_REPLACED

Hurry, there’s only a couple of days of summer left. That means it’s time to sneak in a few more outdoor barbeque sessions, complimented by end of season heirloom tomatoes, corn on the cob, and a few final chilled bottles of Rosé. Then, next week we start with root vegetables, beef stew, and Malbec.
Not so fast. We don’t have to be that literal with the seasons, do we? 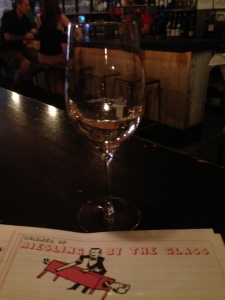 Well, yes if we’re referring to the “Summer of Riesling,” a now iconic program at restaurants and wine bars nationwide to use the June 21st to September 21st period of warmer days and nights to get you the skeptical wine drinker to drink the much maligned grape. END_OF_DOCUMENT_TOKEN_TO_BE_REPLACED

Let’s all agree to begin: Chicago is no second city when it comes to eating and drinking. It’s first tier all the way. With all due respect, we’re talking Michael Jordan here, not Scottie Pippin. Is Chicago better than a San Francisco or a New York or a Tokyo dining scene? Yes? Maybe. No? Maybe. That’s not important. 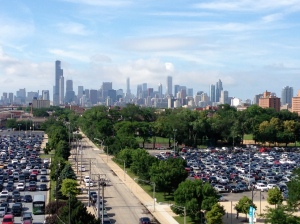 The iconic skyline from U.S. Cellular Field, home of the Chicago White Sox on the city’s south side

What is important is to acknowledge the sheer breadth of this city’s options. Heck, you could just spend a three day trip eating nowhere but Hot Doug’s, never repeat a dish, never get bored, and never do much other than stand in line, eat, sleep, and return. END_OF_DOCUMENT_TOKEN_TO_BE_REPLACED

Hello everybody! Yes, we’ve been away from the writing table at Trev’s Bistro recently, busy on trips to write about this fall and also on assignment for other publications such as Serious Eats and the SF Weekly. Yes, I know that nothing beats Trev’s Bistro. Not even Saveur or Bon Appetit. So don’t worry, we haven’t gone anywhere. However, our formerly daily articles will routinely be more in the 3 to 4 articles a week range now. You can still expect though the same detailed, thoroughly researched articles about dining and drinking’s relationship with culture and travel, mixed with various recipes and analysis on today’s gastronomic issues. As I’m sure you understand, eventually a certain amount of writing leads the writer to start seeing spirals instead of letters on the page (cue Wile E. Coyote and The Road Runner).

On the menu today, here is a superb, epic 7,000 encyclopedia to everything you could ever want to know about ramen, courtesy of Kenji at Serious Eats. Literally everything. 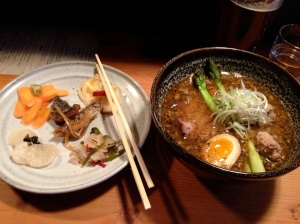 Speaking of Serious Eats, yours truly published a piece last week on eight of the 8 essential (there really are more like 68, but 8 is a more manageable number, so we should have a follow-up here on Trev’s Bistro) places to eat and drink in the Silicon Valley/ on the San Francisco Bay Area’s Peninsula. Even if you live in Sydney or Baltimore, I’m sure you’ll enjoy hearing about this perennially underrated region’s dining scene.

Cheers! Coming up next, a report from the Windy City of Chicago.

With summer slowly coming to an end (don’t worry, it’s not that soon!), let’s head into this Labor Day weekend with something hot and something…hot. Or cold. It depends on how you like your coffee.

A few months ago I found myself in Milwaukee for baseball tourism reasons for one day. I had read extensively about Milwaukee’s two coffee giants: Alterra (now owned by Mars Drinks and supposedly re-named Colectivo Coffee I’m told) and Anodyne . A third, lesser known boutique coffee roaster named Stone Creek also appeared in a few articles. The name sounds pleasant, so that should translate into good coffee, right? Since it was only a few blocks away from my Downtown hotel, I decided to give it a try. 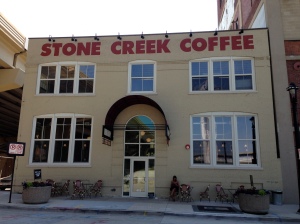 The location sounds a bit…edgy with how I’ll describe it. The factory café and roastery can be found almost directly under the 794 Freeway, down by the railroad tracks, near the Megabus station.

And yet down by the tracks, near the bus activity, under the highway you’ll find a definitive example of what a coffee shop should be. END_OF_DOCUMENT_TOKEN_TO_BE_REPLACED

Just because the three Roca brothers behind the newly anointed San Pellegrino World’s Top 50 “Best Restaurant in the World” are behind Roca Moo doesn’t mean you should stroll into the dining room expecting world class excellence. You will be disappointed. The single Michelin starred Roca Moo in Barcelona isn’t trying to be like its sibling, El Celler de Can Roca, the glittery three Michelin starred destination an hour northeast up the Costa Brava in the countryside medieval town of Girona. Earlier this year, El Celler de Can Roca replaced the Copenhagen restaurant Noma for the world’s best title.
Roca Moo isn’t trying to be El Celler de Can Roca or Noma. 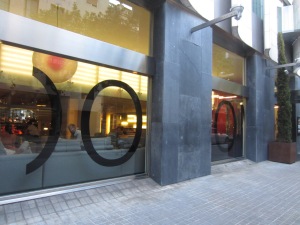 Unfortunately, even reasonable expectations for a restaurant of Roca Moo’s ambition aren’t met. It’s a strange experience that dabbles in its lofty potential from time to time, while altogether making you feel empty. It’s a restaurant currently with no personality. Does it want to be more refined and genre- defying like El Celler de Can Roca? Does it want to be more like a baby “gastrobistro,” of which Barcelona right now seems to have more of than Gaudi designed structures? Does it just want to be a sleek, hipper than thou boutique hotel restaurant with the façade of being an exceptional restaurant? The latter is what I took away walking away to the Passeig de Gracia unfulfilled. I wanted to go to Girona. END_OF_DOCUMENT_TOKEN_TO_BE_REPLACED