About a year ago I made the pilgrimage to Lockhart, Texas for some barbeque grazing in the heart of the brisket belt. The trip really was themed around baseball in Dallas and Houston, with sightseeing and dining in Austin and San Antonio to break up the sausages and beer at ballparks (well, so I ate at Fearing’s, Feast, RDG…not exactly ballpark fare). With a drive scheduled from Austin to San Antonio around lunchtime, it was a natural to visit the “capital” of Texas barbeque, Lockhart. Even though I visited Austin, I passed on the opportunity to wait three hours in the Texas summer sun for barbeque at Franklin’s, even though the Texas Monthly named it the state’s premier barbeque spot a few months later. In Lockhart, you can visit multiple spots…without the wait. And, there’s a cool “Back to the Future”- like courthouse on the town square. 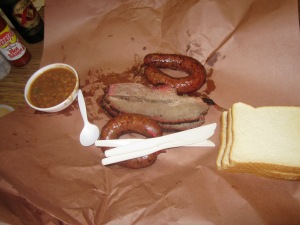 Now I’m not here to tackle the debate of who makes the best barbeque in the Lone Star State, nor am I any sort of expert on the best spices for a brisket spice rub or the best wood chips to use when slow grilling the meat. That’s literally what the Texas Monthly hired Daniel Vaughn to do earlier this year as their barbeque editor. Yes, a barbeque editor. I don’t know if I’d even want that post. Every article probably incites more debate than New York Yankees managerial decisions. END_OF_DOCUMENT_TOKEN_TO_BE_REPLACED

Vitaly Paley is an immensely gifted chef with a cooking vision from many different viewpoints. His training comes from high-end kitchens of France and New York in the 1980’s and 1990’s, while he has helped pioneer the hyper-local focused Pacific Northwest regional cuisine since moving across the country to Portland, Oregon, opening his now iconic Paley’s Place.

Over dinner at the charming Victorian in the city’s Northwest Alphabet District, you certainly get a sense of the classical background with textbook veal osso bucco, a consummate egg yolk crowned steak tartare, and a unique new  meets old classic French tripleheader combining the not familiar together escargots, bone marrow, and sauce Bordélaise. On the other 2013 hipper side, Paley makes a burger that every new gastropub aspires to replicate, and he gladly brings elements of the local forests and fields into a spring pickled green strawberry salad with crispy sweetbreads, and a confit of local spring vegetables joining the halibut a la plancha on a white bean purée accented by a piquillo pepper coulis.

What about scallops with a blood orange gastrique? It’s not necessarily envelope-pushing or a clear-cut haute cuisine or Pacific Northwest standard. Instead, think of this as a unique adaptation of duck à l’orange, evolved in many directions. 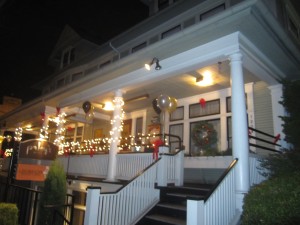 Tonight wherever you may be, we all need some comfort cuisine during these tragic times.

More than any other night, this evening seems perfect for two classic Boston icons: a bowl of clam chowder and some Indian Pudding for dessert. We may be thousands of miles away from New England, but hopefully comfort food such as these two dishes can bring us closer to those affected by yesterday’s tragic events.

Let’s first start with the chowder that you can find up and down New England and even at many of the most recent Presidential inaugurations, courtesy of Legal Seafoods. Make sure not to forget stirring in the flour during the middle of the recipe, or the chowder will curdle and lack the necessary thickness.

Finish with dessert, which has to be Durgin Park’s Indian Pudding, the molasses and corn meal based dessert served at this Faneuil Hall landmark for the past 180 years. I’m not sure if Samuel Adams enjoyed the pudding, but I certainly do centuries later. Be very careful not to burn the top and at the 5 hour mark, use a toothpick for measuring the interior’s moistness. 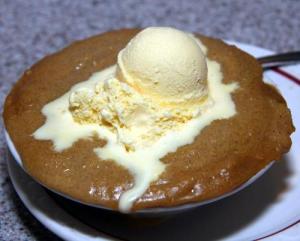 Keep in mind the baking time is 5-7 hours. Don’t even think of enjoying this without a scoop of ice cream– vanilla or an earthy flavor such as pumpkin or the umami- filled burnt sugar flavor at Cambridge’s fantastic ice cream shop, Christina’s.

In times like these, this is what comfort food is for. Hopefully some clam chowder and Indian Pudding from two Boston legends can provide a few moments of solace this evening.

Gianduja is NOT Nutella. Nutella is a form of gianduja. Gianduja is the term for the Northwest Italy (Piedmont, Torino…) dessert specialty that combines chocolate with nut butter, most commonly hazelnut. The usual ratio for chocolate to nut butter in gianduja treats are 3:1, where the chocolate is the central narrative, accented by hazelnuts, almonds, peanuts, macadamia nuts, pistachios, or whatever nuts you so desire.

We understand though that the absolute majority of gianduja products are hazelnut-based, hence the connotation with that irresistible Italian hazelnut spread.

It’s a confusing term, sort of one of those “sure, why not?” cooking words that might have an official definition, but really has been used for so many slightly differing recipes that the term simply describes a concept now. That would be the beautiful sweet marriage of chocolate and nuts.

Oh, and you don’t pronounce the “G” or the “J.” It’s zh-awn (like Shawn with a “Z”)-DOO-yuh. I can’t tell you how many times when I went gelato tasting around Rome a few years ago, I would cluelessly obliterate the correct pronunciation. END_OF_DOCUMENT_TOKEN_TO_BE_REPLACED

This Tuesday, we’ll celebrate the end of the game season and the end of Autumn with… poultry.

“Hunter’s Chicken” is one of the classic Americana dishes of the 1950’s with origins not based in America.

Hold on a second. Repeat that again for me. “Hunter’s Chicken?” What is that? It sounds like some stew Davy Crockett may have concocted with mutton, squirrel, and whatever leaves in the Kentucky forest he could forage.

No, no. No mutton here. For that, go to Keen’s Steakhouse in Manhattan for the chop. This “Hunter’s Chicken” is not a gimmicky name. Everybody knows of “Hunter’s Chicken,” or at least has heard of it at some point when browsing through cookbooks.

“Hunter’s Chicken” is the translation for Chicken Cacciatore. END_OF_DOCUMENT_TOKEN_TO_BE_REPLACED

Duck à l’orange, je vous adore. I admit to eating it year round, though it really is a dish to be emphasized during the autumn game season, when the crisp winds start biting.

Duck needs a good fruit forward, sweeter sauce. It’s just one of those perfect pairings that clicks. Sample duck breasts, we’re not talking duck confit here, with other partners, but the dance just isn’t as compelling without that fruit, be it cherries, citrus, plums, apples, figs, persimmons, or whatever.

In the end, those experts who created haute cuisine years ago knew what they were doing. Then again, you’ll also find overlaps of haute cuisine with bistro cuisine’s greatest hits. Duck with a fruit sauce can always be found in both universes, at three starred Alain Ducasse or the tiny corner bistro Chez Jacques that isn’t known outside of its arrondissement.

Duck truly soars to its finest when paired with an orange-based sauce, à l’orange. END_OF_DOCUMENT_TOKEN_TO_BE_REPLACED

There is a reason we call these “projects.” They are experiments and not every time do you produce a resounding success like pumpkin caramel whoopie pies.

During my time living in and writing about the Los Angeles food scene, every Autumn I would be as excited for Thanksgiving as I would be for the annual trip I would take to the Monastery of the Angels in the Hollywood Hills for their beloved pumpkin bread.

The bread achieved that perfect balance of clove and cinnamon spices, where savory meets slightly sweet. It could be at home alone as dessert or alone in the bread basket during dinner.

Visions of this pumpkin bread in my head got me thinking about potential savory pumpkin bread candidates to join the usual olive bread on our Thanksgiving table this year. Unfortunately the project had its flaws, most likely keeping it away from the table next Thursday. END_OF_DOCUMENT_TOKEN_TO_BE_REPLACED